Someone mentioned to me that it seems as if people don’t dance as much as they used to in New York City. Maybe it’s because more nice places to go to and relax in a lounge-like atmosphere are appearing in New York. Every Thursday, DJ Jason Jordan and Fat Kat host a night called Kung Fu Lounge at Baktun. Coined as a “multimedia lounge” located on West 14th Street right near the Cooler in New York’s meat-packing district, Baktun’s decor and atmosphere is perfect for nights like Kung Fu Lounge. 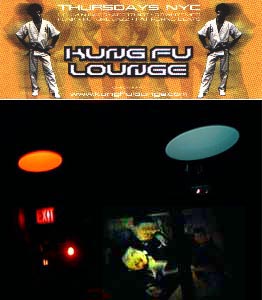 The bright colorful round recessed ceiling lights, exposed brick walls, lit up furniture, odd rubber-like floor benches, projections and visuals of Kung Fu movies remixed and chopped up, all to drum ‘n’ bass soundtracks provided by the DJ’s are good things to surround yourself with while you chill at one of Baktun’s tables or long sofa along the walls. Nights at Kung Fu Lounge have had the Propellerheads guest DJ, Hooverphonic album release party, and expect more exciting guests in the near future. Baktun also showcases local artist work, I assume with a multimedia bent, and plan to work more the “multimedia” into the “lounge” as time comes.

About 7 blocks up from Baktun, on West 21st Street is Lot 61. Designed by architect Rafael Vinoly and Diana Viñoly, the huge former truck garage is now a chic bar/lounge filled with red and brown hard rubber chairs and sofas supposedly from an insane asylum, lots of translucent surfaces creating interesting light patterns, a fireplace, a large bar made of metal, nice zebra-print sofas, and groovy beats. The space also showcases site specific work from artists like Vanessa Beecroft, Jorge Pardo. and Damien Hirst. Lot 61’s space is enormous (seats well over 200 people) and can create a feeling of emptiness not apt for a lounge; so Vinoly cleverly created translucent wall panels that slide open and closed to section off parts of the lounge depending on the size of the crowd. Lot 61 feels a bit more chichi and pretentious than a place like Baktun, but still a comfortable relaxing place to come and have a drink. One night at Lot 61, a friend of mine, James of Fresh55 summed up the feeling of Lot 61 in two statements: “Where’s Leonardo (DiCaprio)?” and “I hate it when the waiters look better than I do!”.