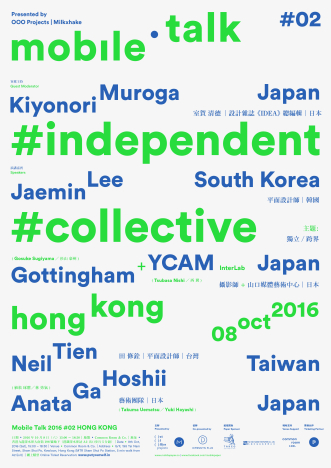 October 8th, “Mobile Talk 2016 #2 Hong Kong” will be held at Common Room & Co. in Hong Kong. The first of this talk event was “Mobile Talk 2016 #1 Osaka” on July 30th, and this is the second. Vary guest speakers have been selected for each venue with the common theme as “Independent/Collective” in 2016.

The venue “Common Room & Co.” in Hong Kong is newly organized by Keith Lam, one of guest speakers in Osaka. Now that ease of movement is rapidly advancing, it is progressing the diversification of working style such as having multiple bases of life and work across the country between Asian creators. In this event, in order to know how international creators work in such a situation, it will introduce each creative scene including their activities and lifestyle by delivering styles. Not only talk, while serving foods of the land, it aims a place of the alternating current for participants and creators.

The second 4 guest speakers Jaemin Lee, a graphic designer from South Korea, Neil Tien, also a graphic designer from Taiwan. And from Japan, “Gottingham” a.k.a Gosuke Sugiyama, a photographer + “YCAM InterLab” a.k.a Tsubasa Nishi, a curator, and “Anata Ga Hoshii” by Takuma Uematsu, an a artist with Yuki Hayashi, a filmmaker. The 3rd in Taipei on November 5th.