Tucked away on the 8th floor of a nondescript building in Mongkok is a room jam packed with video editing equipment, stacks of 2-inch binders, and countless DVDs. Home to Video Power, Hong Kong’s video activist organization, this room has also become the hub behind the 4th Hong Kong Social Movement Film Festival.

With its beginnings around 10 years ago, Video Power has established itself as a socially engaged art organization, producing documentaries in collaboration with community groups, supporting individual video projects, organizing screenings in mostly non-traditional venues, as well as giving workshops on video production and media literacy to community groups, unions, and schools. 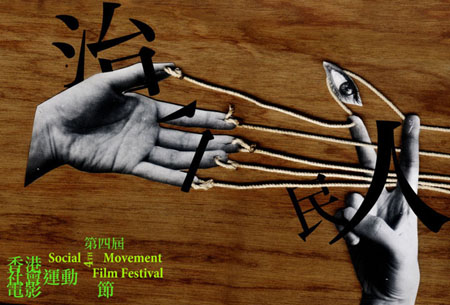 Since its first incarnation in 2003, the Hong Kong Social Movement Film Festival has primarily been organized by the 8A Social Movement Resource Centre, with support from Video Power. However, this year, with 8A’s funding cut by the Hong Kong Federation of Students, Video Power has decided to help continue the burgeoning festival’s annual tradition by stepping up as co-organizer. “It’s important for a festival like this to continue in Hong Kong,” says Video Power’s director, Lee Wai Yi. Yet realizing this project has proven difficult, as the organization has also faced budget cuts and unsuitable demands for a “high quality film festival” by the Arts Development Council. Despite these setbacks, Video Power has managed to finance the entire festival out of a bit of fundraising, some revenue from screenings and workshops, and the overwhelming generosity of a lot of filmmakers, distributors, and volunteers. Screening rights for the films were granted for free, or in exchange for the creation of Chinese subtitles. Some filmmakers even went so far as to fund their own travel expenses to Hong Kong.

As both Video Power and 8A have been struggling with the limitations of their positions under institutional frameworks, the theme of this year’s film festival is ‘People’s Autonomy: Movie Moved Musing Movement – Left Besides Us’. “What is the possibility of autonomy if we don’t want to live under the shadow of capitalist globalization?’ poses Lee. With over 40 films from around the world, several different responses are suggested under the festival’s four series.

‘Autonomous Community’ is a series depicting different community efforts to build alternative lifestyles, showcasing films from Hong Kong, Cambodia, Malaysia, and the Philippines, to name a few. ‘Free Person on the Cross’ looks at the resistance of individuals relying on themselves and their limited resources, from the suicide of Korean labour activist Jeon Tae-Il, to Jesus Christ himself. ‘Autonomous Art Space’ looks at art as a connecting point between the self and the outer world, and as a starting point for democracy. From culture jamming in North America to the creative demonstrations at the WTO MC6 in Hong Kong, this series serves as a reminder of the revolutionary potential of creative production. And in the spirit of such creativity, the series, ‘Raids by Mobile Art’ highlights films created by organizations similar to Video Power, namely, Media Culture Action based in South Korea, and Information and Cultural Exchange (ICE) based in Sydney, Australia.

Throughout the festival, historical tours of local communities will be given, along with talks entitled, “Liberation Theology and Social Movements of Latin America” and “The Paradox of Salvation and Revolution: Pasolini’s Passion of the Left”. All activities are free, underlying Video Power’s commitment to keep the festival as accessible as possible. “Art is a basic human right that has become limited to rich people,” Lee continues. “Video Power wants to assist people in reclaiming art and give art back to the people.”