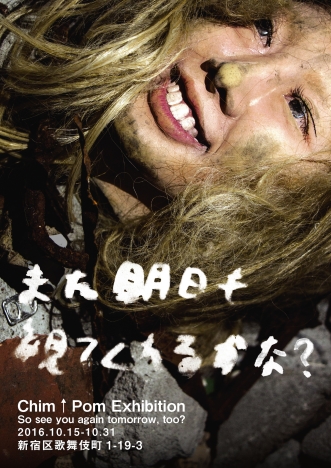 An art collective in Japan, Chim↑Pom will have their own exhibition “So see you again tomorrow, too?” for the first time in almost three years, from October 15th, at Kabukicho Promotion Association Building. Although the building’s demolition has been decided.

This exhibition’s themes are “Scrap and Build” and “by the 2020 Tokyo Olympics”. After suffering a long recession, the current Japan was hit by the great Tohoku earthquake. People are attempting to superimpose the situation back then onto the 2020 Tokyo Olympics. Many positive slogans get reproduced by both the public and private sectors along with ambiguous hope. What is recovery? What is a city? IN the first place, was the future of the 21st century meant to be created by repeating the vision drawn in the 20th century in this way? Japan’s history has repeated “scrap and build” while facing many disasters. Japanese people have lived alongside this changing cityscape. Accepting the many theses and the fate itself of these buildings, we question Japanese people’s “method of drawing a blueprint” through an exhibition itself that experiences a “scrap and build.”

As mentioned above, they will have several parties and events with KAN a.k.a. GAMI, Naruyoshi Kikuchi, Makoto Aida, Have a Nice Day! and Nature Danger Gang and also legendary producer Yoshio Kou, manga writer Hideki Arai × haiku poet Tsubasa Kitaoji…and more artists. Not only musicians and educated people who related with Shinjuku but also Dotsuitarunen, Tetsuwari-Arubatorosketto, Akuma no shirushi…and more young and energetic musicians are going to join this parties. Hiroya Koto is going to direct this party.

The artworks will not be removed even after the exhibition period. This means that this exhibition is mostly “an exhibition to be completely destroyed,” and will be destroyed along with the building by industry professionals. Then Chim↑Pom will collect the fragments of artwork-turned-debris which share the same fate with the building, and reconstruct them. We are going to show them as second shot of this project with the “C” and “P” neon signs preserved from the Parco Shibuya fashion building scheduled to be demolished in our solo exhibition at our artist-run-space “GARTER” in KItakore Building in early next year. As collaboration with Takayuki Suo, the Kitakore building, which is barracks and built before WW2, is going to be reconstructed.