During the boom of summer vacation in Japan, “Myth of Tomorrow” by Taro Okamoto will be “released” in the Shiodome. Although it was painted in the late 1960s, just about the same time in which he created “Tower of the Sun”, it had been long-lost in Mexico. Because of this fact, it’s been said to be a phantasmal giant mural. Regardless of age and sex, many people came to see the legendary artwork by a great artist on the Zerosta Plaza of the Nittele Tower at the Shiodome Portal Site. 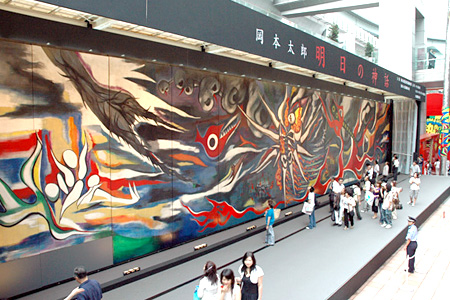 We were bowled over by the color traces of the gushing reds on a black background while standing in front of the painting. However, we were not just standing rooted to the spot. We felt we were alive here even though we were facing a moment that depicts the bursts of the A-bombs. In front of the painting, we tried to match something from our living world with this painted-living-tragedy. 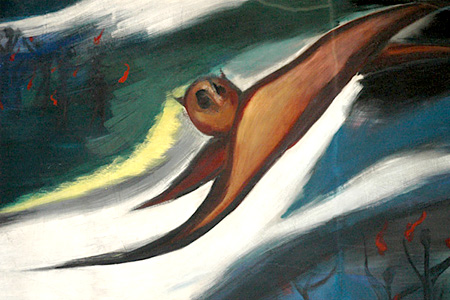 “The title ‘Myth of Tomorrow’ is symbolic. At that moment, it did not only strew death, destruction, and poverty. It also proudly created ‘Myth of Tomorrow’, along with the savage tragedy,” said Toshiko Okamoto.

Brought back from far away Mexico and restored for over a year, this incredible masterpiece lively tells of something that transcends time. 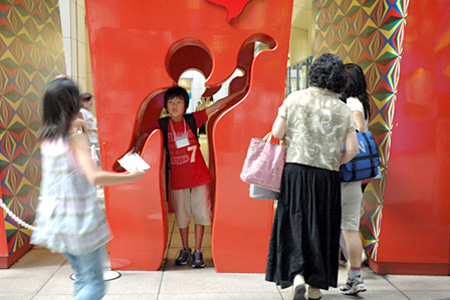 The hot summer site totally turned to TARO world, filled with primary colors. There is the same “Entrance to deny to be passed through” as “A chair denies to be sit on”, and people are taping their overflowing impression of the mural on a video. It was eye-catching that people enjoyed the site, seeing Taro close at hand. Among them, there was a student from an art college who finished their own work, inspired by “Myth of Tomorrow”, caught sitting in front of the painting for five hours.