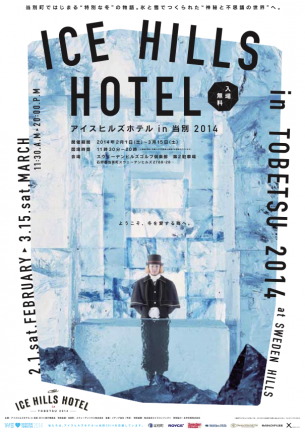 The Ice Hotel which was built with ice and snow can let us experience and stay, in Sweden Hills of Tobetsu-cho, Ishikari-gun near Sapporo will be opened in February, 2014. As part of a Creative Hokkaido project, Clark gallery + SHIFT is in charge of the creative direction of the designs of the three guest rooms in the Ice hotel building. The three artists Toshihiko Shibuya, Midori Kanbara and Leo Fujisawa + Muneyasu Okazaki will design each room and create their original spaces.

This project provides various programs, such as the hotel stay experience in Ice Hills Hotel, food and fun in four Ice Hotel buildings made with snow and ice, including surrounding areas. By offering the ice and snow world with art which releases fantastic beauty. It will suggest a new life-style in long winter in Hokkaido, as a way of taking advantage of the attraction of the mid-winter in northern country as a center of tourism.