“A pen and paper. They’re the most familiar tools to output one’s impulse of expression. And paper which we can bring with us everywhere is note. “NOTE” is a showcase of works and new talents. Whether they’re well-known or not, it’s an “experimental note’ which people who get it write with a pen and use in various ways”. This reader interactive medium which starts with the handwritten words as the quote above by the editor-in-chief, Masahiro Hattori, is ‘NOTE’. 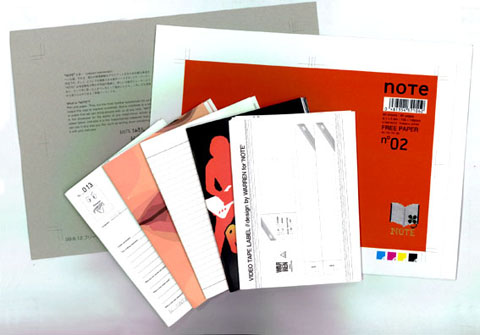 In the stylish visual free paper the size of a memo pad, lots of creative people who make Tokyo interesting show their works and topics. This medium carefully confines the feelings of creators letting us know not only individual information, but also pleasure in successfully having it. The third issue will be distributed soon. We interviewed Masahiro Hattori, the editor-in-chief of ‘NOTE’, to know where this ‘NOTE’ was came from.

Please tell us a brief story of ‘NOTE’.

When I had been an editor of ‘Dictionary’ at Club King, I had a lot of opportunities to see articles by various people and the real graphic scenes. I originally entered Club King because I like music. I was interested in selecting music as a kind of editing of sound. But I became to be interested in the possibilities of graphics and people who are in the field through the editing of Dictionary. As a result of my interest, I began to create a newspaper with only visuals titled ‘Visual Dictionary’ in tabloid form as an editor-in-chief. When the ‘Visual Dictionary’ was finished, I retired from the office as I gained self confidence by the ‘Visual Dictionary’ and I wanted to challenge myself.

Then I set up my own office ‘GO PUBLIC’. When I was telling everyone about my retirement, I was working for a promotion of records and editing a booklet at that time. Tsuyoshi Takashiro asked me to make a free paper with someone. At first it was a kind of a promotion of a school, but I wanted to do it in the form what supported it is a school. We made 140 thousand copies at first. It was amazing. Dictionary was 50 thousand and Visual Dictionary was only ten thousand copies. I’d never been involved in such a large scale and I could only imagine fliers just like garbage at fast food shops or so from the number of 140 thousand copies… I felt a responsibility not to make garbage.

Did you actually distribute 140 thousand copies?

Yes, we did! I happened to watch a news program that said there’s no place for orangutans to live because of deforestation. I thought I was one of the causes of deforestation, and it must have been garbage and it was meaningless if it didn’t target myself and please me, though it should have been public and targeting lots of readers. Anything that doesn’t please the creator cannot interest the readers. So I wanted to make something that made myself happy. But it is no small matter and it can be seen as pushing information for some people. They don’t want such things at all, so its garbage to them. I thought if they were useful for such people…, they would keep them.So there might be ten thousand or fifty thousand, or even three thousand people who respond to the contents that I thought, but if it’s as useful as something to write, they keep it and it’s not garbage. (laugh)

It started from a contradictory point. (laugh) What do you want to tell with ‘NOTE’?

We won’t go ahead?

Yes! There’s still a closed way of thinking and some people say that nothing new has been created. But something like a noise may be born through experimentation. It’s a kind of innovation. I don’t want to tell that as a word, but I want to tell that innovation will start when you get something or where you move from.