All colors were taken from the world!! The work consisting of the quiet new expression and sense of cartoon, adopted the plot and interface of a role playing game style and having the story to get back the colors one by one was born. It’s the work by Kamui Fujiwara “Color Mail”, published in book form from ENIX at the end of January.
Kamui+Studio2B who have sent off delicate/individual works and been supported by fans of comics completed the whole work with digital, and collaborated with NENDO to design the icons, logos and binding. They try to open the door of new expression througn the first trial. 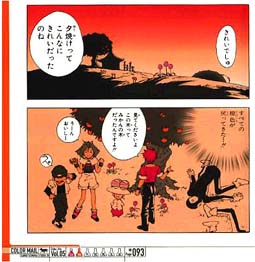 First of all, Please let us know about the details of this work was born.

I have an idea of this work as a game to begin with. First of all, all colors are taken and the color screen becomes to monochrome. I’ve never seen such game and that’s the first idea of mine. I imaged that player can use a color that taken back as an item. Colors increase one by one in the screen, so it’s interesting as a game.
I guessed it’s a bit difficult to do that in a cartoon because color pages will be not arranged so many every time and it costs. But my last work “Dragon Quest-Roto no Monshou” made a hit, so fortunately I could do that. Maybe I’ll never do such a luxurious project again.

The timing colors come back. It’s figured out perfectly and there’s no waste points at all. In fact I concentrated my consciousness on how I could do under the limit that there’re only 16 pages every time. I’m taking pride in it because no one could do like this. It’s a kind of roller coaster comics. 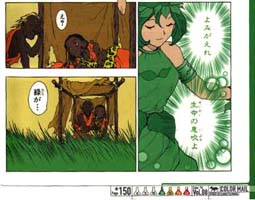 What are the good and effective points compared with the usual process?

First of all, it’s full-digital, but of cource the original pictures were drawn with hands. This process won’t change in the future. In case of this “Color Mail”, we completed the coloring as simple as possible because it’s an animation and reality is not necessary for this work.
We had to complete color pages in a short term, but it’s an ideal motif in the point that whoever could work according to the format that was fixed once as same as the coloring specification of animation.

What was the most important thing when you fixed the episodes for each colors?

Each colors have meanings in themselves, and each vegetations and minerals having colors also have meanings. I took images to express each landscapes and worlds into concideration, and went ahead the works as constracion of a puzzle.
As for the episode, I could think of them one after another without difficulty, but it’s rather difficult to simplify them. Also, the naming was one of the interesting works.

Please let us know the details you appointed NENDO and the impression of the collaboration.

The images of this book are to be a game-style, to have a nature as an item and not to take a populist line. The aboves are the things I’d thought personally before I ordered the design. When I had an idea that it should be done by people who designed for clubs, etc rather than people who binded for books, I was just introduced NENDO people. I relied the design of the book on them readily.

Is there anything you want to try in the future?

As for the attempt in the future, I want to make an application. I think I have to complete a tool like Photoshop useful for comics to work efficiently. In fact I don’t know how, but I have an idea. It’s a tool for comics to complete by itself from background to finishing touch without assistants. It’s a great tool, isn’t it?

Interview and Text: Chibashi (C*2)
Thanks to: Junji Okubo (STUDIO 2B)