The Hong Kong International Film Festival has just ended and during its run from March 31st to April 15th, there were a variety of wonderful films for the masses to get a taste of. One of those was the Hirotsugu Kawasaki directed Japanese animation, Spriggan. I am guessing many people in Japan has probably already seen/heard of this film but here in Hong Kong, the exposure was most likely less in extent. 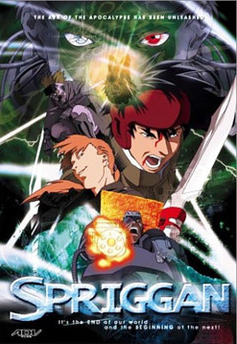 In any event, on the night that I went with a bunch of my friends to see the screening, the auditorium was packed! I was pretty sure anyone that had any interests in art, comics, design, etc was in attendance. I had no idea so many people would be there.

Anyhow, films from the festival were showed across various venues in Hong Kong but undoubtedly, the Hong Kong Cultural Centre has to be the best site and surely enough, Spriggan was shown there. Situated along the waterfront in Tsim Sha Tsui, Kowloon, this venue was prime. With the location taken care of, it was time for the show.

After discussing the film with some friends later on, we all thought overall, Spriggan was pretty entertaining. For those that hasn’t seen it, it was about a highly trained and skilled killer teenage who later reformed to become a salvation warrior. Up against him is a small boy with evil ideas to use Noah’s Ark to destroy the world’s population in order to create a new humanity.

Everything comes together in this action filled animation that has messages about the future all intertwined into one. Overall quality was pretty nice and being able to see Spriggan on the big screen truly made the experience that much better.