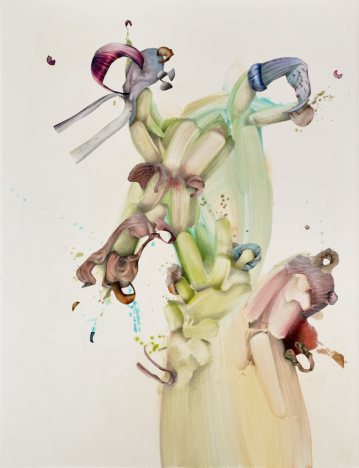 Galerie Grand Siècle in Taipei will hold a solo exhibition of Johanna Flammer titled “Set Out” from May 20th. She is in the limelight of Germany contemporary art scene.

Flammer is not afraid of the “horror vacui”, the emptiness of the canvas at the beginning. She features a new quality by the juxtaposition of phantasmagoric images losing the sense of distance. The multifarious whole beyond nature or surrealism is fortified by her multifaceted touch in acrylic, oil pigment, photography, collage and strokes. She has no pre-fixed image and no compositional pan in mind. Her objective is aimless, consciously losing control during creation.

The essences of the works of Flammer seem to resound with the nomadic energy comparable to the post-structural system, proposed by Gilles Deleuze and Félix Guattari in 1977. Such nomadic elements with multiple, non-hierarchical points of entry and exit can be enjoyed in the exhibited works of Set Out.