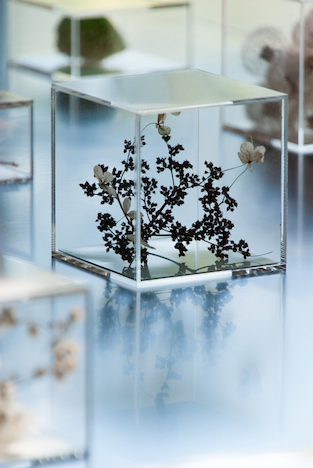 From January 6th, Clark Gallery + SHIFT will holds new exhibition “White Collection 3” of Toshihiko Shibuya, an artist based on Sapporo, Hokkaido, who is one of the few artists showing new art expressions through a theme on this region with heavy snowfalls. And overseas including Dubai and Bangkok pay attention to him, not only Japan.

“White Collection” is an installation which brings a new perspective by reflecting lights on various objects collected by himself. The motifs are mainly fluff such as dandelion, butterbur sprout, willow and asclepiadaceae, honeycomb and dead leaves which have been bleaching during the winter. Indeed all of them are various plants based on white. As basically he collects them in his hands and only processes for maintaining its shapes, these objects could keep nearly the natural appearance. He said that his objects are the device for you to rediscover the beauty of nature around us.

In 2014, he got the Sapporo Culture Encouragement Prize and has been kept creating art works without loosening the hand. This Winter, it’s possible to enjoy the delicate and expressive shading of the “Winter” that he took out at several exhibitions such as “Art to Thinking, Art to Talking” at Hokkaido Obihiro Museum of Art till March 16th, 2016 and “Ice Hills Hotel in Toubetsu” at Sweden Hills in Toubetsu town from January 15th to February 28th, 2016.