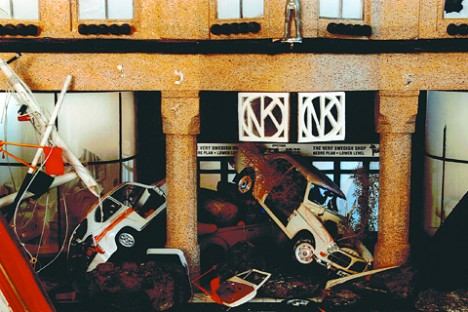 The spring and summer of 2014 the main hall at Färgfabriken will be filled with the works of a self-willed artist, who for the past 50 years has moved unconditionally between different genres.

Film, photography, textile, painting, litterature, graphics and stage design–a vary of expressions in a consistent investigation of ones surroundings. With perspectives that ranges from kitsch and ”whodunnits” to the swedish landscape painter Prince Eugen, Carl Johan De Geer constantly succeeds to astonish.

A manner which for decades unmistakingly has been characterized by sharp details, playful movements, humour and sincere gravity. A penetrating eye and a comforting voice–always in relation to the zeitgeist, regardless of current future prognosis.

The Retrospective exhibition of Carl Johan De Geer–the first of its kind–draws the visitor in to an encounter between job satisfaction and dystopia; a peculiar scene where the clues of the artists conception of the world are merged and constituted as an unity.