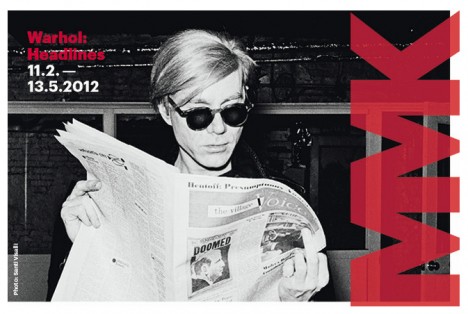 Andy Warhol (1928–1987) is considered one of the twentieth century’s most important artists and a co-founder of Pop Art. Throughout his career, he devoted himself to in-depth investigation of the mass media and the star cult. Now for the first time, with the exhibition “Warhol: Headlines”, MMK Museum für Moderne Kunst Frankfurt am Main will pay tribute to the large group of works in which he used or made reference to headlines.

This comprehensive show was made possible by international cooperation between the National Gallery of Art in Washington, The Andy Warhol Museum in Pittsburgh, the Galleria Nazionale d’Arte Moderna in Rome and the Frankfurt MMK.

Warhol’s interest in headlines can be traced back to his work as a graphic designer for advertising in 1950s New York, when he witnessed journalists in the process of selecting and presenting their reports. “By revolving around Andy Warhol on the threshold from successful New York graphic designer to even more famous visual artist in the 1950s and ’60s, the exhibition takes us back to the roots of the Pop Art movement”, comments MMK director Dr Susanne Gaensheimer.