The Street is a media that is approachable by anyone and everyone and its fair the streets are open to all, free from any bureaucratic way of thinking. Artists had started graffiti as a reaction against the art world, which at that time, wielded a strong authority while moving large sums of money in and out of countries off artists.

Today, big advertisement campaigns are everywhere, put on by global brands on the streets in addition to series of sensational TV commercials aimed at accelerating the consumer market. Many hold that graffiti started from the street culture in the 80’s and that figures like Jean-Michel Basquiat and Keith Haring played a key part through their resistance towards society as the gap between the rich and poor widened. Then, and now, this gap has kept widening. 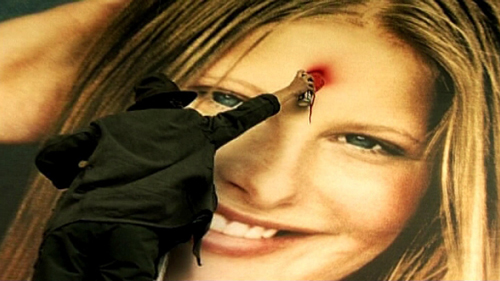 “Inside/Outside” is a documentary film aimed at recording one of the hottest contemporary graffiti artists all over the world. There was special event and screening, “Inside/ Outside-Rebel week-” from 5th April to 11th April at the Uplink Cafe in Tokyo. I went on the 4th day of event, April 8th, to the screening and artist talk by Hisashi Tenmyouya (artist) and Kenji Kubota (independent curator). 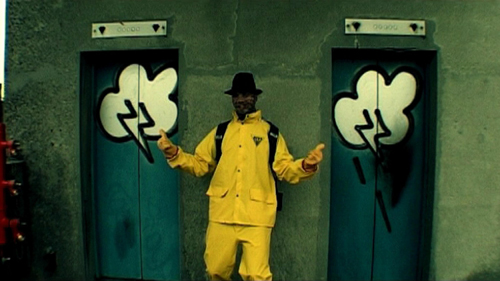 Is graffiti evil? or is an Art due to reveal a kind of social tragedy? In the film, Zeus in Paris, the writer “kills” models on billboards with red spray, and it calls it a “Visual Attack”. The artist went on to say, “We attack advertisements with minimum effort by using the very power of its influence.” 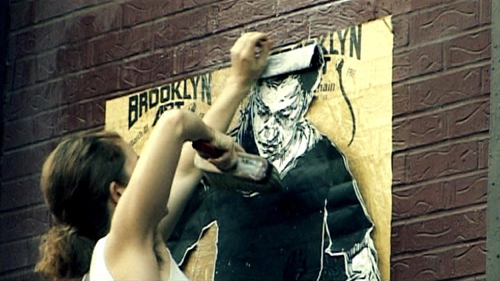 Pigmeus in Sao Paulo remains known as “Tag” on the top of the high buildings. By using original fluorescent paint, KR conquers the town. Swoon is a female graffiti artist in New York. She puts up her posters on the street without permission. Now, her works are recognized by MOMA and the Brookly Museum of Art. She said, “I am happy that a lot of people see my work but, at the same time, its a complex feeling knowing that I am involved in a part of a huge art market.”