Anna & Stephen from Neasden Control Centre were concentrated on working. 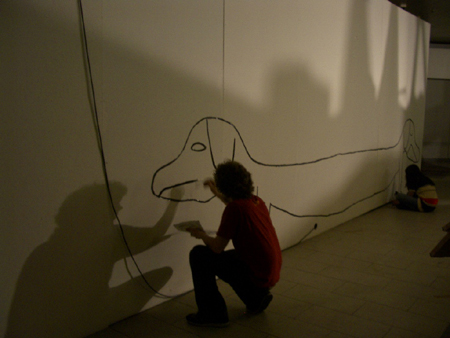 They were creating a big dog installation, a little dog house and dog objects one after another. 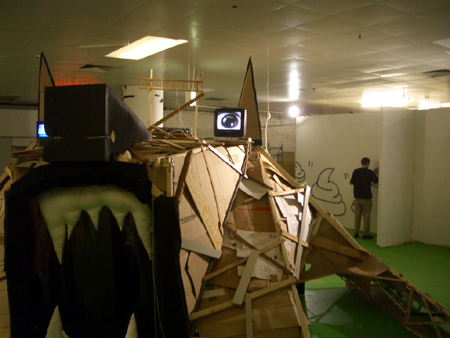 Anna smiled and said that it is nice to see many people joining this project. Stephen was excited with the big project. He said that it was first time to have such a big space which made it possible to see our works from all angles. He had a twinkle in his eyes.

“It was good to stay for 2 weeks and create, it gave me lots of new ideas. I got a unique idea mixing human and dog for the dog installation, I put the TVs in the dog’s eyes and you can project our eyes on it. I’m thinking to bring in all sorts of media such as painting, objects, installation, sound, and video.”

At night Shiro Masuyama’s performance began. He opened the bar as a bartender by using his bar installation. The name is “Parky Party” this means a bleak party. At this bar even if you come with group, you have to drink by yourself. 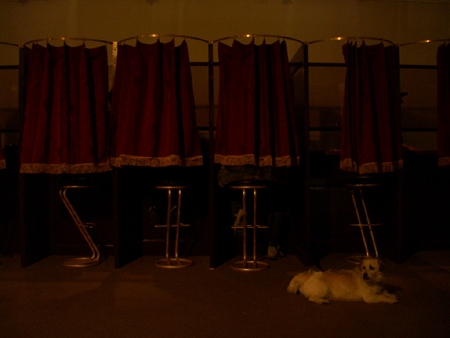 Each booth was divided by screens and needed to be shut by curtains. No talk was allowed with the bartenders. We only need to mark on the menu and put money on it, and then drinks come out. However we cannot leave the seats since the glasses were tied by chains. We were forced to be alone. The set of headphones were not for listening but for soundproofing from the surrounding sound. Two men said that that was a weird bar with a grin, “after taking a seat, I felt like I was being watched by someone and was uncomfortable. So I shut the curtain soon. No talking was permitted, which even made me want to talk. We sat next to each other and communicated by writing on a piece of paper.”

The title for it was “unsocial bar.” It was sarcasm of the people who cannot decide whether they’re coming to see art or chat with others. Not only that, but also the work made me think of private time and communication at a time when perhaps we have an excess of communication with things like cell phones, e-mail and the internet.