“BLK/MRKT ONE” will be released by Die Gestalten. There will be a limited number of pre-released copies of the book to celebrate the launch of the book and the exhibition exclusively at the Diesel Denim Gallery. 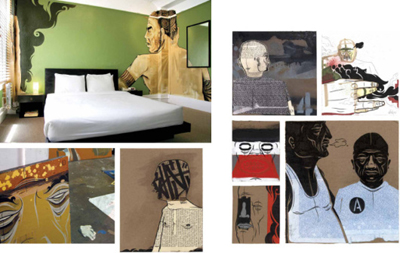 In 2001, the BLK/MRKT Gallery was created as a way present emerging design talent as well as compelling urban art and fine art. Remarkable selection of artists and its professional approach in BLK/MRKT have largely contributed to the increased reputation of street art, its transition into museums and galleries and the global acceptance of Urban Art as a leading contemporary art form. “BLK/MRKT ONE” presents the gallery’s artists and their work, including both up and coming and established urban and contemporary artists such as Deanne Cheuk, WK Interact, Dave Kinsey, Evan Hecox, Tiffany Bozic, Ben Tour, Doze Green, Jeff Soto, Brendan Monroe and more.

For the launch of the BLK/MRKT ONE, DIESEL will host an installation conceived by curator Sebastien Agneessens at the New York, Diesel Denim Gallery, including original works featured in the book as well as new commissions. The book will be released in Europe starting at the middle of May and will go on sale in Asia shortly thereafter with a North American release to follow in June.