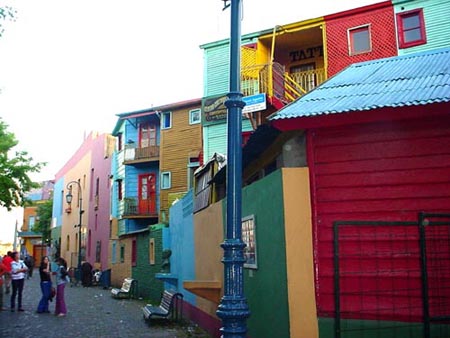 It was a sunny Sunday morning when I took a ride to La Boca, one of the most ancient and popular neighborhoods of Buenos Aires. I didn’t really know what to expect, because I used to go there as a child and it wasn’t a pretty landscape for me. In fact, I found it dirty, noisy, obscure.
That thought crossed my mind as I was arriving. But it soon disappeared in front of the surprisingly clear river. A romantic view suddenly surrounded me. There was a crowded row of twenty, maybe thirty people, painting their landscape, everyone standing in front of the river. I told to myself it wasn’t the place I had imagined. And that was a good thing. 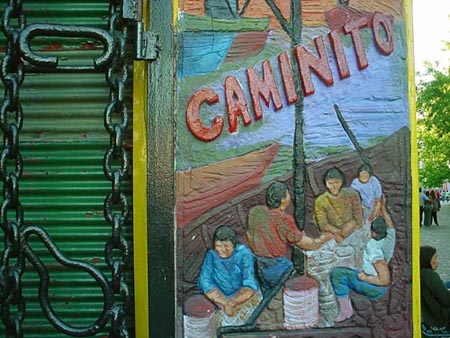 La Boca has too much history. It’s situated at the border of the Riachuelo (a small river), and it was a refuge for the immigrants from Italy and Spain, who arrived between the years 1880 and 1930. That’s why the city port was established there, where the new argentine inhabitants worked.

The mixed cultures brought a particular new physiognomy to the neighborhood. The houses were then made with wood and metal sheet, and the walls were colored with the leftovers of paintings that they obtained at the port. 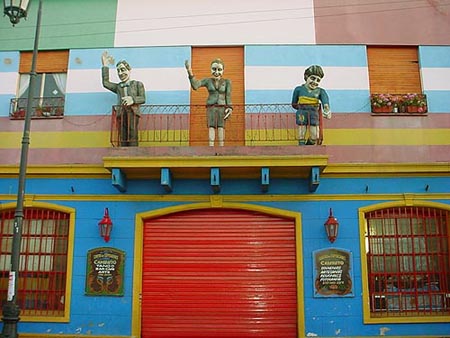 The beautiful bright colors are still the main characteristic of this place. Painters love it even more than photographers, and every Sunday many of them work and sell their works of art around Caminito (little road). Caminito is the most precious icon of La Boca, it concentrates the tourist movement and offers alternative “tango” shows with music and dance.
The particular thing about Caminito resides in the restored “conventillos”. Most of them have become open art galleries and renowned painters ateliers. The conventillos, almost a sign of poverty at the beginning of last century in Buenos Aires, were enormous houses with a room for each family. They were, of course, overcrowded. And also one of the places where tango was first heard and danced.
Tango, which was perceived as a marginal musical gender, found in conventillos a place to spread its roots. Even though, tango was born as a music for brothels, not suitable for those decent workers that inhabit the conventillos. Nowadays tango has crossed every frontier and it became a close friend of La Boca. 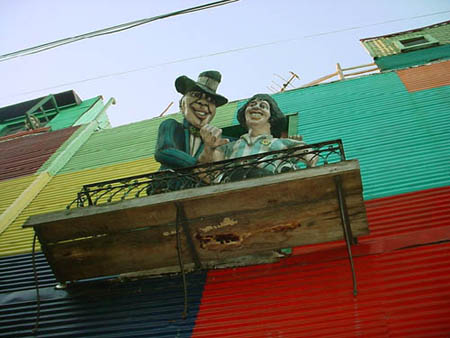 You can see many things on a Sunday in La Boca, a synthetically unique neighborhood. The classic family reunion around the table at midday, the “asado” with typical pampas meat, football on TV, lots of painters everywhere portraying each other in front of an imaginary view, the occasional tourists trying to see it all, our popular art on paper, on wooden houses, on the stoned pavement.
La Boca appears to be all of it. And what’s best: people actually live there. 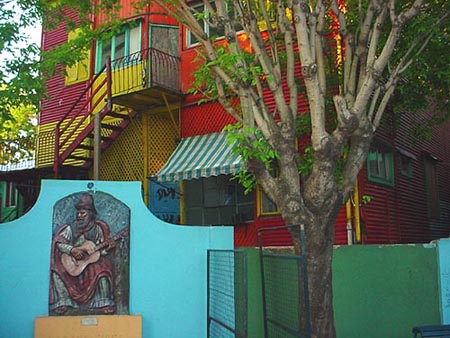 While I waited for a lady to leave her house before taking a picture of it, I realized La Boca actually exists as a place where people live. The colorful houses we see as an object are inhabited by people.
Some of the houses haven’t even changed a bit from the old days. When one of the neighbors opens the door, we are able to see the long corridor full of closed doors which have inherited who knows what mystery.

If we listen carefully, we can even hear the family gathered around their Sunday table, prepared to eat lunch in front of the TV. Maybe they don’t understand the purpose of the pictures and sightseeing routines. And perhaps that is why they are some of the most genuine example of our culture. After all, they are a hundred per cent “portenios”.