Last night, I saw a movie in the MK2 film theater. I really appreciate “Gracias a Dios” a short film of Francois Koltes. 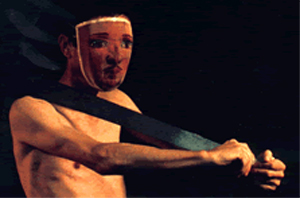 Francois Koltes is the Bernard-Marie Koltes brother (Bernard-Marie Koltes is a very famous french writer and playwright) and he is architect and director (stage manager). He created this 6 minutes movies in 1999. The story is about a museum guardian who reconstitute during a night the Nicaragua history from the Spanish conquest to the last national revolution.

It’s like a play decomposed in three acts in a dark room.there are no special effects but only one actor on a black background and miniatures. I was impressed by this movie impact. It is able to describe all the Nicaraguaian situation,to denounce the Spanish imperialism and the American imperialism, without a word, without pictures of blood, of war. It used only symbols and few objects.