Even if you did not know about “ImaginaryForces” (IF) well, you have seen their works somewhere. Film title sequences, such as Harry Potter, Seven or Mission Impossible are ones of many works of them. I could see a careful and faithful attitude of IF to all works from the words of an art director, Matt Checkowski.

Please introduce yourself as well as ImaginaryForces. Tell us how was IF was established in 1996?

I arrived at “ImaginaryForces” (IF) in 1998 after graduating from design school. I was working in a variety of media, mostly motion and interactivity, and really wanted to be at a place that would allow me to reach out in any direction. IF was the perfect place.

Since coming into prominence in 1996 for it’s main title work, the company has done everything from feature film marketing (Men In Black, the Mummy) to sports stadium experiences (Baltimore Ravens, Madison Square Garden) to architectural environments (IBM, Wexner Center). We’re in both Los Angeles and New York City, but our connections to entertainment and Hollywood really open up a lot of different opportunities on both coasts.

What is the secret of a key to success in this variety of projects?

I think our success across all these media relates directly to how we think. The people at IF are such a diverse group; everyone does many things and comes from many different places. At the end of the day, we all come together in the service of ‘the idea’. What is the best way to approach this problem? What is the best way to say what the client (be it an advertising agency, or corporate giant, or film director) wants to say? These are some of the questions we ask ourselves regardless of what the project is. Our diversity gives us flexibility – it allows us to create unexpected combinations.

Are there any IF’s original producing process when you start a new project? Also, has each member of IF has got each role to proceed a project?

Every project brings different challenges, especially when were working in a variety of media. There are about six teams at IF right now, but the structure isn’t that rigid. There is a lot of cross-over. Our teams expand and contract depending on what each project needs. We work with a lot of different people who do a lot of different things.

What do you think about that many people in the world watch your sequences? Do you feel any pressures that you are making one for “a famous film”?

It’s really great when your work is on a stage that a lot of people get to see. A film is such a powerful way to talk to people – and I think that is where the pressure is. We get so many great opportunities and have had the chance to tell so many different stories at so many different scales. I think we’re our own biggest critics – we try to emotionally move every single audience member in every sequence that we do.

Not only from the film title sequences, but also from an interactive advertisement in Times Square in NY or images that are shown on a 100ft by 24ft screen at a stadium, we feel an impression “Big” to IF’s works. Also, audiences can be varied for each work. What do you think about these points?

I think people are most drawn to the work that feels “big.” Sure, it’s amazing to create something that is immense in scale, but we make everything from postage stamps to stadium screens. I think regardless of scale, our work ranges from loud to quiet, aggressive to peaceful. Communication is what is important to us. Who are we talking to? What is the message? We can put a sunset on a skyscraper or make typography jump around on your television, but if it isn’t saying the right thing, if it isn’t conveying the right emotion, we feel like we haven’t done our job. 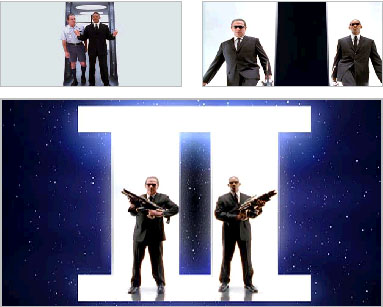 IF is based in Hollywood. What is an advantage(s) to work in the city that is well known as the film capital? As an artist, do you easily receive impulsion or inspiration from Hollywood?

Hollywood is great. We’ll always have our foot in the entertainment industry. Everyone at IF came to IF because of their love for film. I think we all love film because film, itself, has so many influences. It’s our relationship to the industry and the medium that helps us move into so many other areas.

Please tell us about IF site. We heard that you do not have many experiences to deal with web so much. What is your opinion(s) to this new field Web?

I suppose this was an inevitable question. I was hoping it wouldn’t happen. Our poor website is the way it is because we’ve been too busy to change it. It really depresses me to think about it. So much so that we’re not waiting (or stalling) any longer. We’re currently rethinking the ImaginaryForces identity. So much of our process feels like something that is reactive and responsive. So many of our ideas can be best communicated interactively. The company has grown so much in the past several years that we need to talk about ourselves, and what we do, differently. 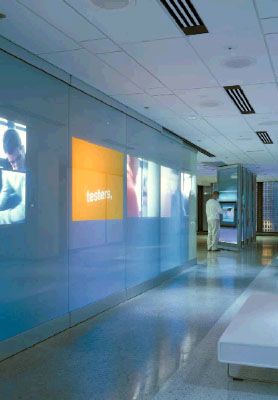 I think the web is amazing. As I mentioned, the interaction that it provides is something that so many of us are drawn to. What we don’t have the experience with, or the desire to do more often, are motion graphics on the web. It’s not about that for us. Interactivity works its way into so many of the things we do. The e-business Centers that we did for IBM are not only responsive spaces (the music of the center responds to where the guests are standing), but it’s visitors use interactive tools like an interactive table that we designed, or a touch screen kiosk that lets the guest tour the space virtually. The prevision sequences that we created for the film Minority Report are visions of the future that the police use to stop murders before they can happen. We created a virtual interface that allowed the detectives to ‘scrub’ the previsions. To us, how they (the characters in the film) used these images was as important as the images themselves.

We’re all, obviously, very aware of the web. We’ve worked in it before, and I know that we will be working with it a lot more in the future. It’s just got to be the right the right occasion. As for our website, all I can say is that it will be changing very soon!

Please explain about the cover design for this issue. What did you image when you were making this design? Did you put any messages there?

Of all of the different media, I really find those that are interactive to be the most inspiring to me. I love how tactile an interactive experience can be. It is really a shift in thinking from motion or static media. It’s so individual. I wanted the cover to be something that felt organic and mesmerizing.

What sort of producing process did you take for this design?

This is a little personal brain-nugget. I’m not sure that i’m self-aware of my process for stuff like this… maybe someday I will be. Sometimes I just need to sit down and start making.

Please tell us the projects that you currently are doing.

We have so many different things going on right now. It’s really exciting.

I just got off of Steven Spielberg’s Minority Report where we created the Prevision sequences I mentioned earlier. It was an amazing experience where Kurt Mattila and myself were on set for the length of principal photography working with Steven Spielberg to create these sequences that feel as if downloaded directly from someone’s head. It was a fantastic opportunity for us to create these plot-integral sequences within, what turned out to be, a film. We’re trying to figure out how to take everything we’ve learned and translate that into what’s next.

I’m currently in the middle of a stadium and broadcast identity for a NBA basketball team. I’m also doing a commercial for a video game. We find ourselves getting excited by, and doing a lot more work in this area. Gaming is growing so much and we feel like so much of what we do speaks directly to where games are going.

There is constantly a friendly rivalry between the LA office and the NY office to one-up each other on film titles, commercials, and just about everything else. The company is working harder than ever to do better work. We’re working with amazing collaborators in a variety of media.

What sort of future IF is looking at?

We keep getting excited about new opportunities. We keep falling in love (again) with film. We’re not only working with others, but we’re developing our voice so that we can create our own content and tell our own stories.