The mutual attraction between fashion and architecture that is being presented as a very recent development really began in the 1970s, when fashion designers started to look beyond the conventional restrictions of marketing and to hire architects to work on the image of their stores. The collaboration between Shiro Kuramata and Issey Miyake is a good example. At the other end of the market, Esprit worked with Sottsass, Citterio, Foster and others. Today Prada has Rem Koolhaas as its architectural guru, and Miyake continues to work with architects, including Frank Gehry. 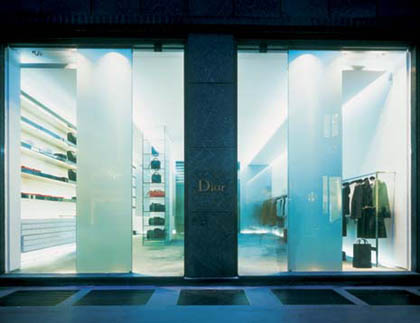 A curtain of garments runs around the edge of the store, lining the display area which is dematerialized by shafts of light from the floors. Pierre Huyghe’s elongated interior space is both art installation and a changing room.

But the balance between the two sides is unstable. While the world of architecture is only just beginning to react to Koolhaas’s shopping theories, the fast-moving fashion system already seems to have shot past and taken over, to judge by the new Dior store in Milan. It’s not an architect trying to make a fashion store, but rather a fashion designer moving into architecture and bringing art with him. The star system has the fashion designer at its centre. And it depends on no dilution of the designer’s – or rather the brand’s – aesthetic vision. 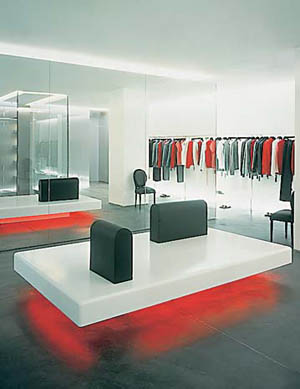 In the centre stands Pierre Charpin’s platform with black leather backrests, hovering above a circle of red light, above.

Since it entered the orbit of Bernard Arnault, head of the LVMH group, Dior has relied on Hedi Slimane to run its menswear operation. Slimane is in the middle of a titanic clash between LVMH and Gucci (which controls Yves Saint Laurent); indeed, the press has tried to depict him as some kind of anti-Tom Ford. Whereas one is the picture of health and the dispenser of luxury, the other is leaner and quieter, more inclined to spend his time under a leaden Berlin sky than in the bright sunlight of a Caribbean island. 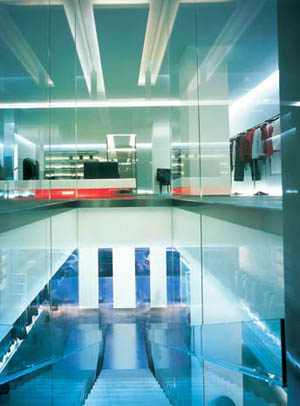 Hedi Slimane, Dior’s artistic director, was responsible for the architecture as well as the overall image of the company’s first men’s shop, in Milan.

Slimane’s position was made official with the presentation of his first menswear collection. All the corporate top brass was in the front row. Karl Lagerfeld and Bernard Arnault sat next to each other. And the occasion was made all the more resonant when Yves Saint Laurent was conspicuously absent from the simultaneous parade of clone-models that Ford staged in his honour for the house that still bears his name.