Four years ago Telse Bus founded the “Kochsalon” (cooking saloon) with two friends. The motivation to do this step, having not a lot of money in the pocket studying art at hamburgs “Hochschule fuer Bildende Kuenste” – university, was the fascination for cooking as an art form. Being not satisfied with making more “traditional art” like painting and sculpturing, cooking as a modern way of expression always fascinated her. 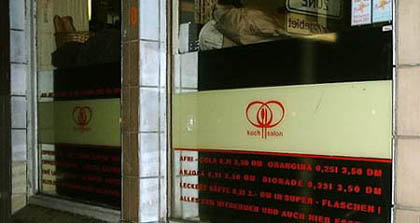 “It’s like that: you can take tons of food into a location, and everybody will take a part of it home in his stomach and a memory of an unforgetable night in his head.” says Telse on this Wednesday night. Especially this perishibleness is one aspect of her art that she’s still fascinated about. “The other arts were always so modern, sampling other materials like videos, photo stills and music, and I just thought that I could do the same with food which always has this antique image. I wanted to cook modern food and create a certain atmosphere around it and so make it a happening all together,” she explains. One thing she tried to avoid though was to come too close to the very calculating and commercial gastro events that maybe can serve good food, but it’s always for the masses and lacks of a certain personality. 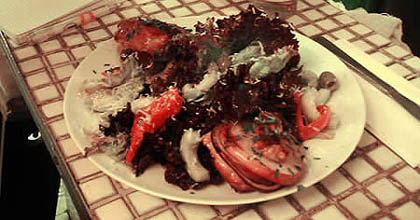 To finance her project and being able to pay the bills for renovation and the purchase of new cooking equipment, she had the great idea to throw parties every saturday night in the just rented rooms of the “Kochsalon” and sell shares for 50$ each. In return, the buyers could eat for 60$. All shares sold out in a short time, so that the almost 7 month that it took to get the location working, didn’t cause too much financial trouble. This renovation resulted in a counter to sit at that surrounds the kitchen so that you feel kind of at home watching mommy cook.

This wednesdays menue:
-Celery-cream-soup with croutons
-Salad with fried pork-fillet-apple-burger and elder-chutney
-Mangold-timbale (=backed in a cup) with pumpkin-sweet-potatoe-filling on cream-vegetable -Artichoke-feta-cheese-ravioli on green pepper and leek
-Goat-cheese-saltimbocca (=some kind of roll) with noodles and green beans
-Salmon-fillet under dried cod-crust with braised cucumber and dill potatoes
-Spaghetti al arabiata
-Apple crumble with liquid cream