Dutch artist and fashion designer Simon de Boer has created a new collection of “rags” based on the ancient principles of the Cynics. His brand is called W.M.E.V.V.J., Wees Meester En Vormgever Van Jezelf (loosely translated meaning: be master and creator of oneself) a quote from Friedrich Nietzsche’s. W.M.E.V.V.J. does not have a store, it does not have any points of sale. It exists and disappears, only to surface again unexpectedly, wherever. Inspired by the lives and thoughts of ancient cynical philosophers, W.M.E.V.V.J. is trying to redefine the meaning of lifestyle in today’s society. 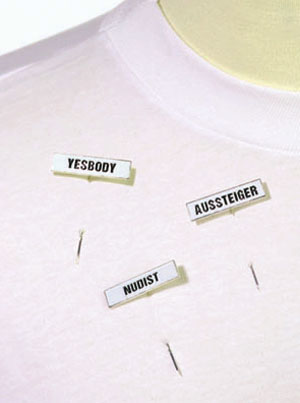 The Cynical Philosophers; The Cynics, who lived c. 445-365 BCE, believed that living a virtuous life, which they also identified with living according to nature, is necessary and sufficient for attaining happiness. They disdained conventional values, such as wealth and social status, which they thought were opposed to living according to nature. The Cynics were never a well-organized philosophical school; Cynicism was more a way of life than a philosophical system. One of the reoccurring characters in all of W.M.E.V.V.J.’s creations is Diogenes.

Diogenes was a Cynic philosopher. He attached himself, as a disciple, to Antisthenes, who was at the head of the Cynics. Diogenes fully adopted the principles and character of his master. Renouncing every other object of
ambition, he distinguished himself by his contempt of riches and honors and by his invectives against luxury. He wore a coarse cloak, carried a wallet and a staff, made the porticoes and other public places his habitation, and depended upon casual contributions for his daily bread. 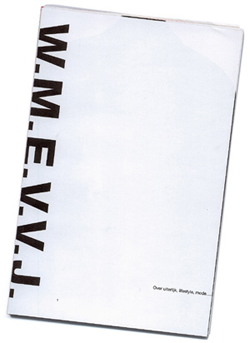 W.M.E.V.V.J. Stylebook; W.M.E.V.V.J. & Lemon scented tea have created a book, a catalogue if you will. This so called “stylebook” forms the heart of W.M.E.V.V.J.’s new collection of “rags”. It’s an indecent book in which the story of the cynics and the newly created W.M.E.V.V.J. “rags” comes to live. The book tries to redefine the meaning of “lifestyle”. Today lifestyle has become synonymous with a polished world that merely seems to exist of happiness, health, eroticism, beauty and success. It is being dominated by commercial targets while mass-media constantly try to create new trends and hypes.

The new collection is quite pragmatic and has been split into a number of very distinctive “chapters” or themes. 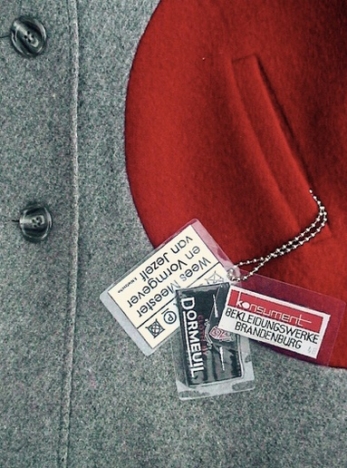 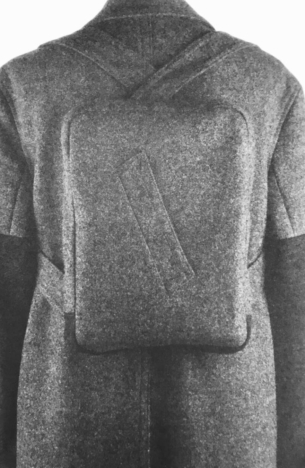 W.M.E.V.V.J. Homeless: the cynics only wore “rags”, left over from others. By selecting and using second hand clothing W.M.E.V.V.J. has found a way to express contemporary cynicism. Different items are combined with each other in imaginative ways, the pocket and left over pieces from one coat become a back-pack, sleeves are switched from coat to coat, two dress shirts combined into one and so on. 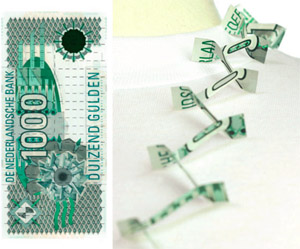 W.M.E.V.V.J. Bankrupt: All the cynic’s possessions were to be carried along. One day Diogenes saw a child drinking water using only his hands, without hesitating he reassuringly threw his flask away. Yet another consequence of his struggle for total freedom. As a tribute W.M.E.V.V.J. created a masterly crafted and scissor cut necklace made from an actual Thousand Guilder banknote ($500). The motto: don’t spend it just wear it.