Please tell us about the exhibition held in Kyoto and Tokyo.

In Kyoto, the first exhibition of null* was held at PRINZ, a comfortable place where a cafe, book store, gallery and hotel were combined from the 18th of January to 20th of February 2005. The theme was “margin”. We sought for pieces of whom we were conscious. Also, we used paper for all the pieces, so the exhibition was made up for pieces whose part of the margin was importantly made the most of. Moreover, an interactive designer was a key member, so we made an installation, which was interactive and reacted with the camera’s sound and image, and we set up a PC and camera permanently and projected onto the floor with a projector. 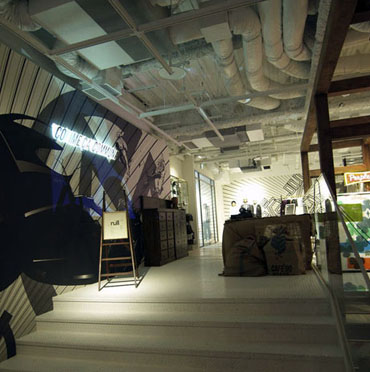 After this, we held an exhibition inside a shop in Tokyo on behalf of an offer from a fashion brand COMME CA COMMUNE from 9th to 25th of September 2005. It was a traveling exhibition and we exhibited the graphics and the interactive works made in Kyoto. Then we produced, “null* book” a portfolio whose name was fool. 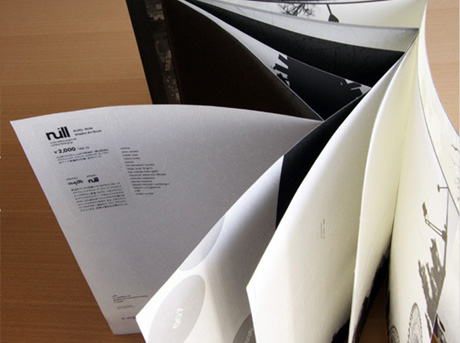 Please tell us enthusiasm and so on about an exhibition at SOSO, which starts on the 11th of February.

We will make it null and a good exhibition with whom I can blow my horn 🙂
I hope to meet you at the opening party on first night. You can see Akira Osawa’s live painting. I think that the 14 pieces for this exhibition make a very good balance. Though each one’s character is expressed strongly, the concept of null* gently makes them one piece in total. I recommend you to enjoy the 14 pieces in one glance. Also, our second portfolio is going to be released on that day, for which the 14 pieces are gathered and which is a big book of about A1 size after its been unfolded. 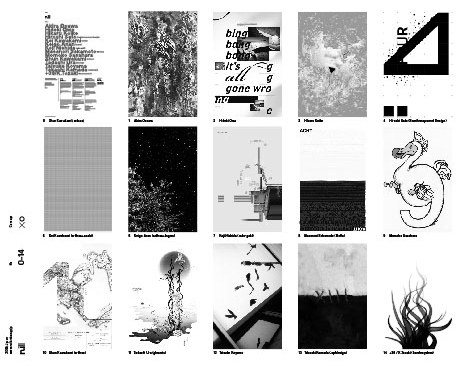 Please tell us also about entries for “Electrical Fantasista” held in Yokohama.

We submitted 2 pieces of interactive works that moves a reacting camera. Mr. +39 and Kamada tell about them. 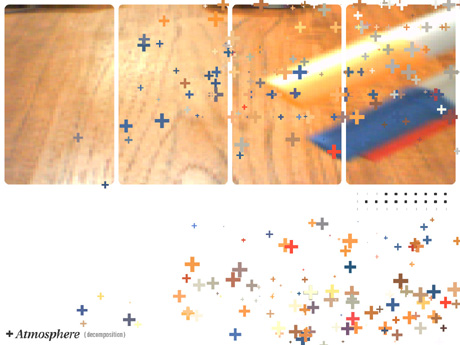 +39/K.Tozaki (KARATE SYSTEM)
The piece exhibited in Yokohama is “Atmosphere(decomposition)”. This piece is an interactive one, which dissolves dimension of vacancy and is transmitted by way of a camera. Spatial awareness is expressed in the form of the extraction of a changed part’s colors. A camera, as a device, perceives changes that come up in vacancy through seeing outputs coming from unconscious inputs, which come up in static vacancy (null area). Though there is much room for improvement, I hope to deliver a template of “read the atmosphere” with the computer. In a simple term… 🙂 I wanted to make a piece that reacts to the understanding of a human’s feelings 🙂 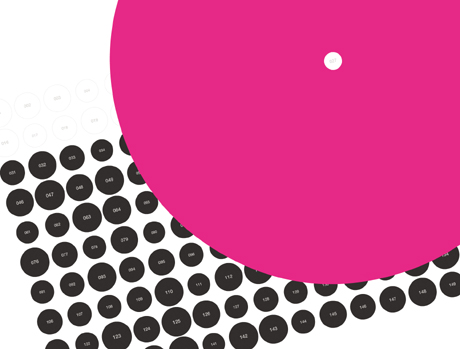 Talashi Kamada (.spfdesign)
“Factoral Dots”, which is exhibited on Electrical Fantasista in Yokohama is another interactive piece. It forms images by detecting environmental sounds which leads to a reaction by a group of dots. If it detects volume that sticks out from the average volume, the groups of dots erase needless dots. When all the needless dots are erased, the groups of dots form a certain figure. In a word, it moves if you shout. Then, it will be a certain picture. Adding sound(+) erases dots(-), then the phenomenon itself becomes a deed that forms figures(+). This is an example that null’s concept “-=+” is embodied. (Factoral is a coined term)