After having established its reputation as guide to the weird and wonderful world of contemporary design, the berlin-based graphic design e-zine Designershock now has brought out their first book, published by “Die Gestalten”, Germany’s foremost design publishing house. Not only their extravagant optics, also the numerous interviews and features with the most prominent players of the international design community have made the e-zine one of the leading reviews of experimental electronic experiences on the internet.

DSOS1 is a manual, anthology and key to an internet world in one. 80 fonts and 4 especially written programs speak for themselves.

Please tell us who you are.

Designershock (DS) is the name of an open-ended design project based in various Berlin living rooms. There is a core team of three, periodically augmented by friends and enemies. The three DEEES are Stefan Gandl, Rob Meek and Birte Ludwig.

Tell us how Designershock started.

DS is a label which we three started in late 1999. It quickly developed into a brand for international web-based experiments. For the three of us it’s an experimental platform which allows us to work without the limitations of any unified philosophy.

DS is like being in a band. Somehow the process of making DSOS1 was a bit like that used by the Beatles’ when they made the White Album. The recording for our album started on January 3rd, 2001 and lasted till August 28th, 2001. During this period the three of us worked separately on ideas and “tracks” at different locations. The studio was the only meeting point where everything was collected and discussed. Sometimes one persons’ basic track was left to be finished by the others; sometimes the final track was worked out together. A lot of work didn’t survive this process.

Apart from rare public performances (eg: Centre Pompidou/Paris in April 2001) “DS” only actually existed as a unit during the irregular and short recording sessions. At the end of the 8 months we ended up with four unique DS software tools, 80 DS fonts, and another 178 original DS decoration facilities to be downloaded onto the user’s workstation. Many of the DS fonts are integrated into games which need to be won in order to download the font files. DSOS1 is a good example for how we work together, combining our strengths without giving up our own individual identities.
The DSOS1 project gave us the opportunity to show the diversity which exists within the collective in both print and digital media. 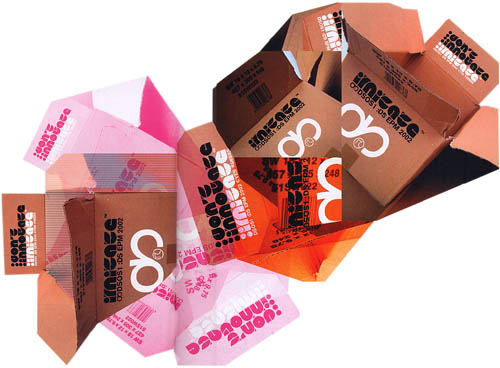 Built systematically using simple geometrical forms. As simple as the motto “Don’t innovate: imitate!” What more can you say?

You are a young magazine, but your style and the contacts you have look very proficient. How did you get your contacts in the first place?

Stefan: DS is very very young. DS1 came out in April 2000. There will be a total of four issues, three of which are already complete. The handbook called DSOS1 was developed parallel to that. In the online issues we try to introduce interesting, sometimes contradictory, contributions in the form of interviews and new work. The contacts happen because of mutual interest and usually take place virtually – just like the contact between Shift and DS.

Tell us more about the manual, please.

Rob: The manual is a guide to an imaginary operating system. The website is an emulation of this OS. In the manual the user will find incoherent elements of system and narrative, as well as some pragmatic advice.

Stefan: The book also functions as a snapshot of what we’ve been working on and what we’ve completed in the last few months. In some cases it’s the final stage in something which won’t be pursued any further, in others it could be the start of something new. DSOS1 is currently the only legitimate and material supplement to what’s suggested by DS online and the only authorised answer to possible questions about DS. The basic layout is based on the european version of the Letraset catalogue from 1990/91. The cover is made of PVC and can be used as a mousepad.