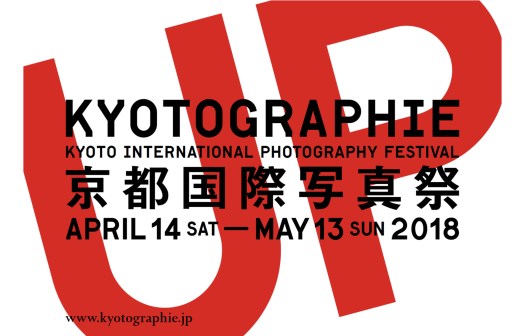 KYOTOGRAPHIE in the ancient city of Kyoto will be held from April 14th to May 13th 2018. KYOTOGRAPHIE is one of the few and truly international artistic events taking place in Japan. Its theme for the 6th edition is “UP.”

Valuable collections of photography and works by internationally renowned artists are exhibited in elegant and historic buildings as well as modern architectural spaces. The Museum of Kyoto Annex, Ryosokuin in Kenninji Temple, Kondaya Genbei Kurogura and Chikuin-no-Ma, Sazanga-Kyu (Former Icehouse), Kyoto City Central Wholesale Marcket, Kyoto Shimbun B1 Former printing Plant, and y gion are just some of them. Some shows feature the work of traditional artisans, while others highlight collaborations of the most modern technologies. Their goal is to present a multifaceted photography festival that cannot be found anywhere else but only in Kyoto.

The full-scale and solo exhibitions by Jean-Paul Goudea, Alberto García-Alix and Frank Horvat will be their first exhibitions in Japan. Jean-Paul Goude has been widely recognized since the 1980s as a multitalented “image maker”, photographer, graphic artist, designer and film director. Alberto García-Alix (Spain) who is enthusiastically popular in Europe (Spain) and Frank Horvat brought a new dimension to the photography fashion in the 1950s, and is recognized as one of the most influential photographers supporting the golden age of the genre.

Masahisa Fukase and Yukio Nakagawa are two artists whose exhibitions mark their first posthumous retrospective exhibit in Japan. Also some young artists works will be exhibited in a photographic platform. The popular Chinese artist Liu Bolin, Tomomi Morita who won the 2017 KG＋ Award and Izumi Miyazaki who attracted international attention while she was still at university via internet postings, will be there too.