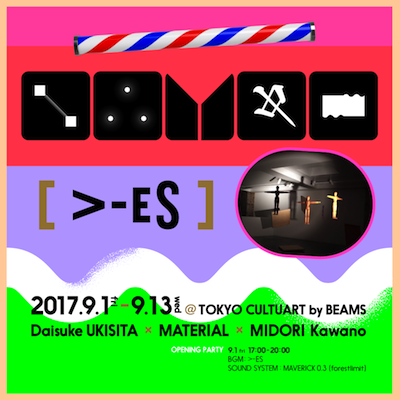 An exhibition by the newly formed Mixed Media Art Unit [ >-ES ] will be held from September 1st to 13th at TOKYO CULTUART by BEAMS.

[ >-ES ] was formed by the three members of graphic designer / art director Midori Kawano, CG artist Daisuke Fujita, and MATERIAL from industrial music duo “CARRE”. The abstract images of the three members from the same generation who were connected by the music scene were converted into art works.

A new sound system “MAVERICK 0.3” of the event space “forest limit” in Hatagaya will appear at the opening party on September 1st.