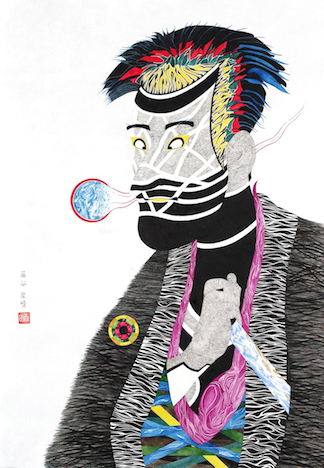 A solo exhibition, “DRAWING Tribe. Modern Kabuki Fellows” by Yasuharu Fujiya will be held at the 2nd floor of Cross Hotel Sapporo from July 5th to September 30th, as Machinaka Art X_edition vol.25 which has been held for many years by the hotel and Clark Gallery + SHIFT. In this exhibition, a contemporary painter based in Sapporo, Yasuharu Fujiya will exhibit mainly his new works drawn as a tribute to “Okubi-e” (close-up portraits of actors or beautiful women) by Sharaku who was a famous painter of the Edo Period.

In our society with rapid evolution of digital technologies, “facing fictional reality” is a new problem. However, Japanese have been recognizing existences of invisible things in our spiritual culture since ancient time. We have been creating dynamic two-dimensional arts like Ukiyoe or Manga. Fujiya has started drawing Japanese “Yao yorozu no kami” (eight million gods) as his main theme since 2007, and had exhibitions both inside and outside of Japan.

“DRAWING tribe. modern Kabuki fellows” exhibited in this time is a new series inspired by Okubi-e by Sharaku in which Mr.Fujiya found “reality of the existence”. To give an essence of “reality of the existence” into his works, he emphasized fictionality of Sharaku’s Okubi-e and brought him today as a new character to update the old fashioned concept of Sharaku’s Okubi-e. In this exhibition, parts of his last works are also introduced as well as this new series.