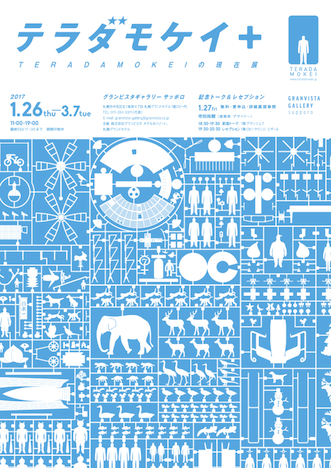 The exhibition by TERADAMOKEI will be held from January 26th to March 7th at Granvista Gallery Sapporo. “TERADAMOKEI” conveys the fun of assembling models and imagining the process of assembling while exploring the potential for modeling, which is created by scaling things down and giving them details, through models.

Naoki Terada, an architect and designer born in 1967, had made and used TERADAMOKEI as set accessories with models for presentation of designs to owners offices. Because there were many inquiries about them when he exhibited it at an exhibition, he began selling the “1/100 ARCHITECTURAL MODEL ACCESSORIES SERIES” from 2008, then TERADAMOKEI became an independent brand since 2011.

In this exhibition, various models produced by TERADAMOKEI will be exhibited and sold, including corporate commercials such as POCARI SWEAT which they have done so far will be screened. On January 27th, a talk session & reception will be held with Naoki Terada.