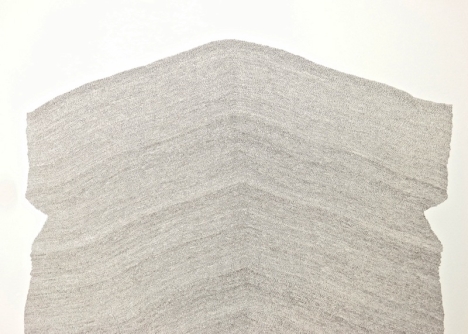 A man facing the numbers “123” the most in the world, Tomohito Saito will hold his unique exhibition “123” at Clark Gallery + SHIFT in Sapporo from April 2nd. Started break dancing during high school days, he has been active in the field of dance, Butoh and physical expression until 29-year-old. With directing a stage production and designing the dances/movements, he is an artist who produces plain works and sculptures using the numbers “123”, based his own philosophy grown with physical expression.

For this exhibition after the chapter 1 of “123” exhibition on December 2015, he will display countless works of “123” such as dimensional works depicting a variety of shapes while drawing more than 100 million characters of the numbers “123” as 1-2mm size on one sheet of paper and lining up the numbers “123” which he draws it everyday as a diary, something very familiar drawn the numbers “123”, works tied the string in the rhythm of the “123”, and remixed sound refraining the numbers “123”.

Public production is planned in the term of the exhibition. Then “123” tights will be released by a brand “Dress and Tights” at Museum Store at the same time. The continuance of the numbers “123”, drawn with diverge feeling as listening a variety of music at various times, will give vary rhythm to viewers and the space.