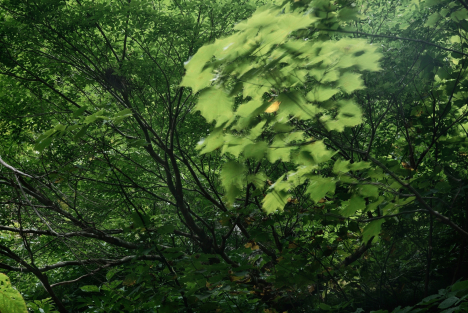 Gallery Slant in Kanazawa will present Ryuichi Ishikawa’s solo photo exhibition “Camp” from April 9th, who just released his photo book “Camp” in February. He is an up-and-coming photographer got the prize of Kimura Ihei Award in 2014. Published “polyphony of superb view” and “okinawan portraits 2010-2012” simultaneously as a debut, his photos taken in straight Okinawa where he was born and raised up were left a strong impression on the viewer.

For shooting this book, away from Okinawa as his subject so far, he dared “survival climbing” in 2 mountains of Honshu with equipping to the minimum and procuring foods locally. Recorded 45 photos that he took as placing himself in the wilderness.

At the opening of this exhibition, he will hold screening and talk event with Miyaji Elizabeth a filmmaker and Kotori Kawashima a photographer as guests. You could see what impressed his mind and made him shoot as occurring eventuality one after another during the survival.