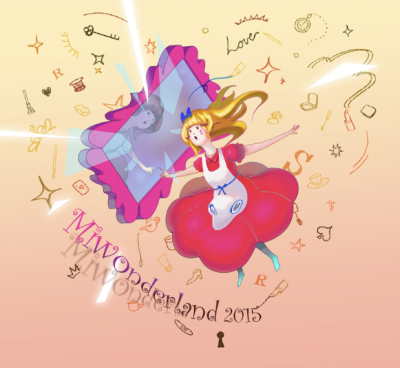 “MiwonderLand” produced by Miwonderful as Miwa Yokoyama comes to Rising Sun Rock Festival 2014, too! She will serve makeup for the festival, with from 500 yen.

Rising Sun Rock Festival 2015 in EZO (RSR), the largest class outdoor music festival in Japan was held from August 14th till the dawn of the 16th, 2015 at Ishikari Bay New Port near Sapporo.  Clark Gallery+SHIFT is in charge of the creative direction of the official make up booth “MiwonderLand” by a make smile artist Miwonderful. With the concept as “Miwonderful jumped out in the world of mirror,” 3D spatial presentation will be shown like it came to life from the illustrated book in “MiwonderLand.” Prepared for everyone from children to adult for a grand entertainment. Don’t you enjoy the festival with making up?

Then, you could see live performance with making up by Miwonderful. In addition, an all girl performer group, “PartyDolls” who attracted a lot of attention with their sexy outfits in 2013 and “jealousguy” will act there. Don’t miss it!