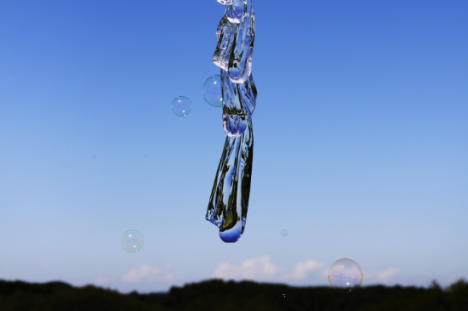 A glass craftsman, Daisuke Takatomi‘s glass exhibition “Summer Drops.” will be held at Clark Gallery+SHIFT in Sapporo, from July 3rd to 31st. One-of-a-kind flower vases and tablewares, made by blowing glass, have been attracted a lot of fans, and this time he will exhibit his works as an art.

Opened “glass café gla_gla” in Tsukiura of Lake Toya cho, Hokkaido in 2002. In 2012, his glasses were used as works of glass craftsman Kimiko Amari played in a movie “Bread of Happiness” which Yo Oizumi starred, and 2013 he produced a campaign glass of “SAPPORO CLASSIC” by Sapporo Beer and also appeared in its TV commercial.

Because his glass works also used for lighting in various facilities such as florist and restaurants, unwittingly you would had a good look at his works. The peptic titles named every single works stir the imagination of the viewer and users, and decorate the life richly. To touch the feelings that have been put in this exhibition title “Summer Drops.”, please visit there.