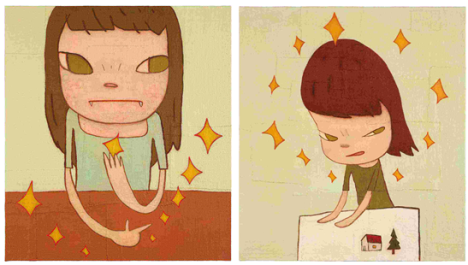 Pace Gallery Hong Kong will present “stars”, Yoshitomo Nara’s second exhibition at Pace following his 2013 show in New York. The exhibition features recent works by Nara that combine his adolescent figures with star imagery and his work with burlap. Coinciding with Art Basel in Hong Kong, the exhibition will be on view from March 13th to April 25th, 2015.

Although stars have previously appeared in Nara’s work, this exhibition and recent body of work marks his first focused engagement of the theme. Nara paints his distinctive adolescent figures interacting with or surrounded by sequences of golden four-point stars. The youthful nature of Nara’s figures conjures childish notions of the star, varying from earning a gold star as a reward for good work in school to the optimism of childish bromides such as “shoot for the stars” and “wish upon a star.” The latter phrase highlights the way stars can be read as harbingers, auguring the fulfillment of a wish or something more sinister. The many facial expressions of Nara’s figures suggest these meanings, be it the hopefulness of a child gazing up at the stars or a more adolescent cynicism, chary of any sense of hope. The exhibition also features a 2011 acrylic and pen work on a woo d panel shaped like the four-point stars in the more recent paintings, establishing the motif in his oeuvre.

Nara’s works on various surfaces such as cardboard and jute on wood create different effects for the paint. In several of his new works, he uses jute stitched together that is then stretched over a wood panel. The stitched jute creates a textural surface of irregular gridded lines that, coupled with the wood panel, lend the work an almost sculptural quality. Nara seeks to counterbalance these forces—the textured of the jute especially—by painting in flat blocks of color devoid of texture evocative of Japanese woodcuts. This technique of flattened paint distinguishes itself from the layering of diaphanous and airy pigments that characterize much of his work, yet finds precedent in his earlier billboard paintings.