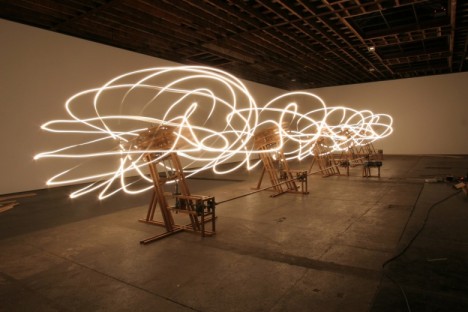 A powerful, hypnotic robot transforms into a choreographic sculpture activated through a series of concerts: the exhibition evades the notion of artwork and performance, paying homage instead to the figure of Ada Lovelace, Lord Byron’s daughter and a British mathematician known for her tempestuous life story. The exhibition’s other component is a residency program that will unfold over the course of the summer in the artist’s London studio and will be broadcast live at Palais de Tokyo.

Inspired by the life of the Victorian mathematician, Ada Lovelace, artist Conrad Shawcross has transformed an industrial robot into a choreographed light sculpture which forms the origin of a series of musical commissions and residencies by leading female composers and performers. The performative installation unfolds over the course of the summer in both the Palais de Tokyo and the artist’s London studio.