One of the most important art-event in this Roman winter is the opening of the Gagosian Gallery. Larry Gagosian, the american-armenian art-businessman, known as “the Shark” for his incredible intuition has presented his new space in the “centro” of Rome. Via Francesco Crispi is a narrow street, a stunning place in the earth of the “città eterna”, right in between the “Spanish Steps” and Via Veneto and piazza Barberini.

750 squared meters in an historical building dated 1921, previously used as a bank. The incredible feature is this oval room, 23 meters of length, wide 13 meters and with celings 6 meters high. An unforgettable wrapping white effect, well planned to embrace the visitor. 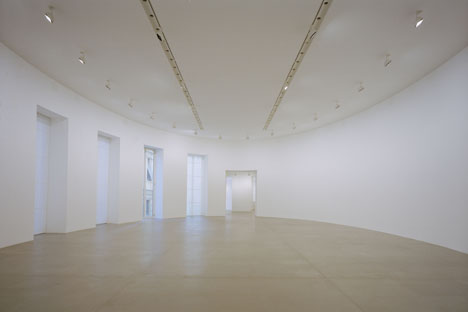 Three Notes from Salalah by Cy Twombly is the opening exhibition: three paintings (2,5 by 3,5 meters each, acrylic) realized between 2005 and 2007 and for the first time shown to the public. Cy Twombly, born in 1928, has been living in Rome since the 50’s. In 2001 he received the Golden Lion at the 49° Biennale in Venice. He has been already a strong collaborator with Gagosian and he will be the protagonist in a retrospective exhibition at the Tate Modern in late 2008. 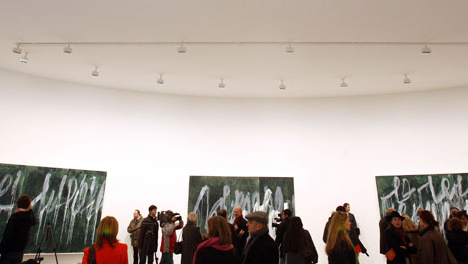 With this Roman base, the first on European continent, the spaces are seven so far. Three in New York, one in Los Angeles and two in London. It seems long time ago when in 1979 was opened by Larry Gagosian the first Gallery, considered one of the main galleries for modern and contemporary art in the world.

The project here in Italy was devolved upon the Roman architect Firouz Galdo, and the English company Caruso St John. “7 months to find the place, 7 months to project it, 7 months to realize it” says the architect, admitting that everything was well planned and organized. And they managed to accomplish the hardest tak: to present an innovative design and to preserve the historical charm of the space. 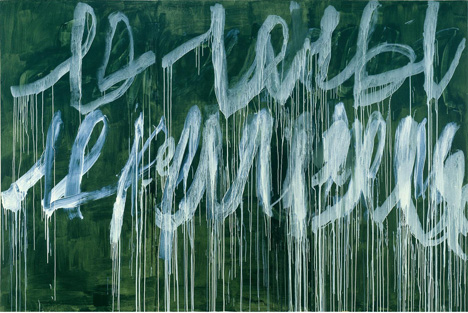 While Mr.Gagosian appears to the audience pretty reserved and demure, the director of the Gallery, Mrs. Pepi Marchetti Franchi is the active contact with the world. She sees this important operation as a step outside New York towards the old continent, with the will to bring a little piece of the City in the eternal City. “We live in a global art-market, and we have to be more and more aware of that, possibly keeping quality on Art and not to fuel the superficial aspects around this world”.

Everybody is excited around this artistic and economical move and Mr.Gagosian wishes to his new project to become part of the cultural life of Rome. Who knows the city and who is in the Art field can easily recognize the challenge of such a decision. In Italy you can find Contemporary Art in Milan and Venice (during Biennale) but Rome has been considered moribund and little attentive to new trends.

“The city has never been a simple hive of innocent creativity, but a place where art and power meet. As such, it is the most corrupting place any art lover could visit – because it convinces you that power and wealth can, in fact, create the greatest art of all”. The Guardian, the british magazine, touches a key-element to understand in a proper way this decision. Franchi explains how, in Gagosian’s vision, artists will be drawn to this city with its traditions of creativity stretching back more than 2,000 years. She adds that the reason for opening in Rome is not to tap into the contemporary art scene, but to celebrate the splendour of this great city.

Power and Wealth once again meet to give birth to a new interesting project, that personally it has to be seen much more complex than celebrating a city and more interesting than making money.
This is the kind of bet that this city deserves and more than welcome if this act by “Go-Go” Gagosian could be useful to shake the static energies of a certain reactionary Art in the capital.