Going to Habitus, a “designed space” owned by renown Hong Kong artist and designer Kith Tsang Tak Ping, feels like a form of time travel. One must first follow the antique tram-car tracks from one of Sheung Wan’s MTR stations and approach the red bricks and white mortar of the historic Western Market. Inside, one finds Victorian architecture leading to a surreal array of Germanic cake-shops and fabric merchants.

Brave the Escher-like iron staircases (reminiscent of Los Angeles’ famous Bladerunner Bradbury Building) and follow the disembodied music to the third floor, where middle-aged Hong Kongers are twirling around in ballroom dancing class. Head towards the bathrooms and a semi-hidden staircase, and ascend into Habitus itself, where the past is shed and a design-y future awaits. 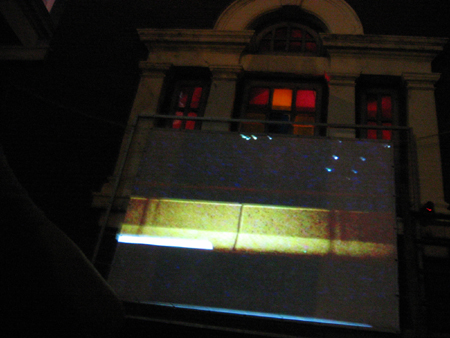 On this particular evening, Habitus was celebrating both its recent “re-opening” (for many months the shop has been laying low, only open rarely, but is now re-invigorating with new hours, products, and events) and the launch of the video-art and animation DVD “PLAY>“.

The party began with a courtyard performance by Moneme (an electronic music/video duo comprised of French translants Cedric and Sylvain) and HC Gijie (Norwegian sound/video artist) in which they mixed live sound and video coming from the massive freeway and docks on the other side of Des Voeux road. Simple, hypnotic, time ran in fits and starts as the grainy video feed of cars slowed and overlapped, faded and rushed on. The sound cycled like a dream of the city’s own music-car tires, horns, metal meeting air, all mixed to make the hard edges seem soft and warm. 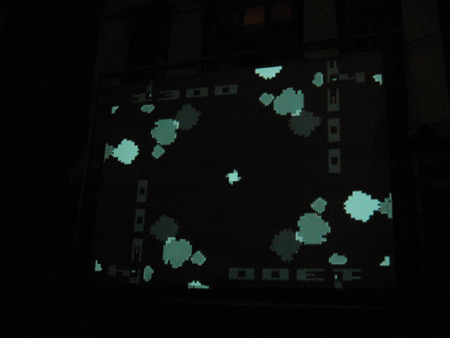 After the performance, selections from “PLAY>” were screened, all the audience sitting on folding chairs or on the ground of Habitus’ open-air brick courtyard, sipping wine and chatting softly. As expected, all forms of “games” and “play” were the focus of the films included. Many selections were by Hong Kong artists, such as Ho Siu-Kee’s “Counting from 1 to 100” (a meditation on counting, math, and mirrors), Hung Keung’s “Time Liquid [2 Players Version]” (a time-game involving cylinders made of video-stills), and Jamsen Law’s “A Little Little Game” (a more abstract take on “game”, in which a young woman crayons in a coloring book while the video image gradually blossoms in full color from black-and-white).