Kan Yasuda was born in 1945 in the city of Bibai, on Japan’s northern Island Hokkaido. He spend his high school and collage years in Hokkaido. During his boyhood he was an enthusiastic high school baseball palyer. With the age of 24, Kan Yasuda graduated from the Sculpture Department, Graduate School of Tokyo National University of Fine Arts and Music, in 1969. In the following year, 1970, he came to Italy on a scholarship from the Italian government. He enrolled in Rome Academy of Fine Arts. There he sudied under the sculpture Professor Pericle Fazzini (1913-1987). Afterwards he set up his atelier at Pietrasanta in nordthern Italy, 80 km from Florence, near Carrara, the Italian marble-producing district. For the two millennium since the Romans discovered marble there, Carrara has produced the world’s finest marble. Already Michelangelo carved his masterpieces from its stone. Kan Yasuda was enchanted by the smooth touch of the white marble, and it reminded Yasuda of the snow in his hometown, Bibai. He was falled in love to this very hard, but also smooth shining white stone.

Kan Yasuda had exhibitions all over the world, his sculptures were shown in Italy, France, England and Japan. In Sapporo city you can find his sculpture at the Central Station Entrance, in front of Kitara and Hokkaido Museum of Modern Art. 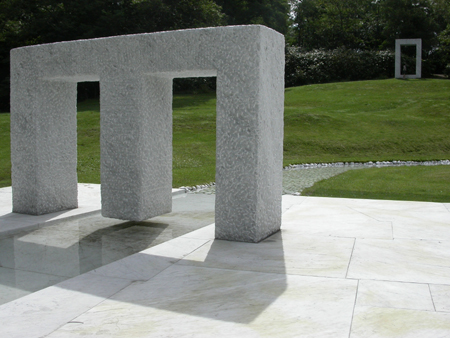 Shift decide to look at Kan Yasuda’s sculpture park, called “Arte Piazza” in Bibai. So, on sunday morning, 25th of September, I took the train to Bibai, it takes about half an hour. At the central station Bibai you have to change to bus. Then after quater an hour you will stay at the entrance of the artplace. It was a sunny day, perfect to look at an outdoor art place. I enter the area and the first I saw was a white marble block in the middle of the grass green meadow. I go closer to the cube and I saw that the block, sink with one edge into the earth, an other one rise into the heaven. The surface was very raw unpolished. There were other sculptures which have a more smooth surface, so smooth you will like to touch it. 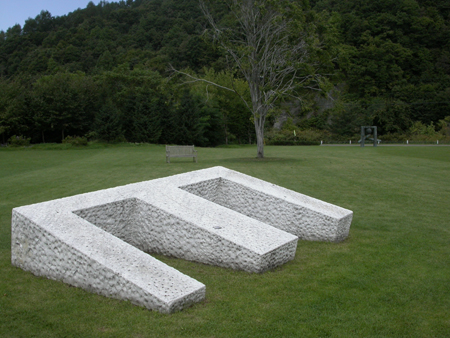 In generally Kan Yasuda’s sculptures are not for a white artificial room in a museum, where you should not touch the art. His art is for the nature and for the people, kids, younger and older, you should play on it, touch it, to feel the deep voice of the stone. The white marble lost its laziness, as he would light fly over the ground. On the opposite the bronze artwork looked to me like it would be one with the dark brown earth. 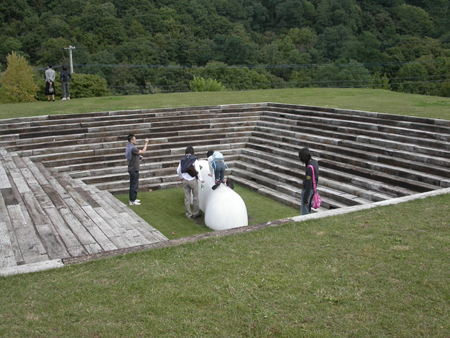 I go to this park without any knowledge about Kan Yasuda. But his sculptures had a deep intense on my mind.

Later I read a text about Kan Yasuda. I realized that his hometown, Bibai had a very dark past. While the second world war a lot of Chinese and Korean people were working in the local coal mines, at this time the mines were called death camps. Scores of workers pershed every day from malnutration, starvation and violence mated out to prevent their escape. Also after the war, many people lost their life in the deep underground of the coal mine. “If only I could bring air to all those souls resting underground”, says Kan Yasuda while the place was under construction.

I think this is an important background to understand Kan Yasuda’s work at the Arte Piazza. Then one of his main theme in his work is about “life and death”. When you know about the history of the city you will look with diffrent eyes to Yasuda’s work. Most all of his sculpures are connected with the earth, or stand out of the earth gasp for breath, like all the workers in the darkness of the coal mine gasp for breath and light. 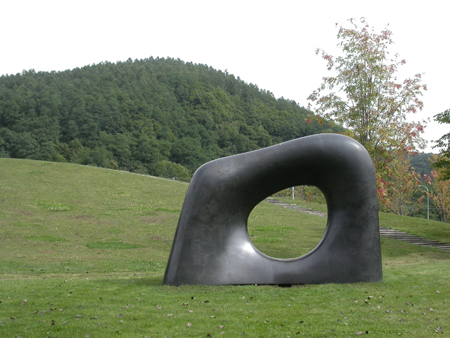 All the material Yasuda use for is sculpures, marble and bronze, are about white and black, light and dark, life and death. The bronze scultures mostly had a raw surface, while the white marble had a very smooth, delicate surface. What also was very impressive, was the contrast of the material and the nature. Leaves and grass were glowing green, under the sun and then this white marble in it, just amazing, beautiful. 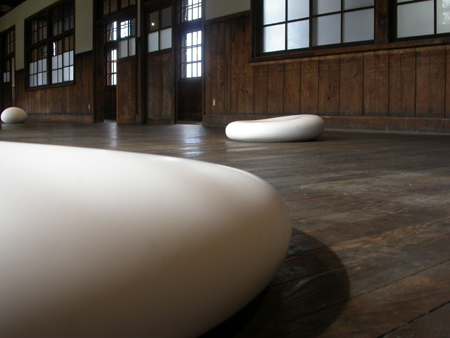 All the big sculptures were placed in the garden, and some small one’s in the old school building and the gym. The renovated school building is build of old floorboards and wooden panels on the walls. The floorboards are creaking when you walk on it, create a nostalgic atmosphere. Probably also because they absorbed the memories of the students who learned there. Also there you have a beautiful contrast between the old, brown, earthbased wood and the glowing white marble, placed everywere in the building. Samething the gym building, the interior of the wooden building, with typical pre-war round ceiling, had somehow kept his plain but appealing warmth. 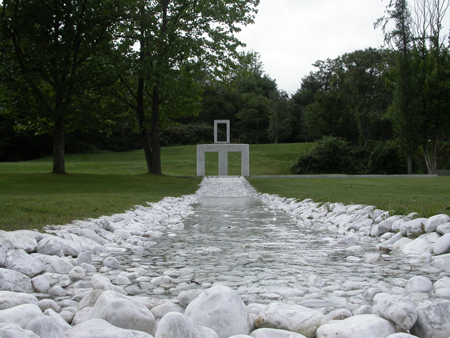 An other element Kan Yasuda use for his sculpures is water, between the school and the gym was made a water playground, called “Tenmoku”. The playground consist of a marble gate with three pillars, one of them hang lightly over the water channel. The two other pillars are based on a marble floor. The sculpture is on the one hand static on the other moved. The water flowing beneath “Tenmoku” represents the passage of time. The narrow between the stone and the surface of the water represents the space between heaven and earth.

This place looked to me like a big playground for childern and the education house in the middle. I read later that Kan Yasuda was inspired, to make the plaza by and for the children, our future. 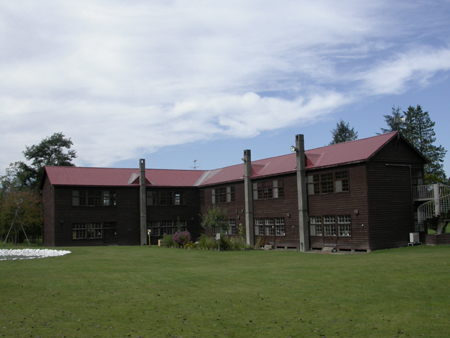 The Arte Piazza Bibai does not know fences or entrence fees, the people could enjoy there freedom of human being. You can walk around enjoy Yasuda’s work, stroll inleisurely, read a book, there is space or all kindes of dreams and wishes. 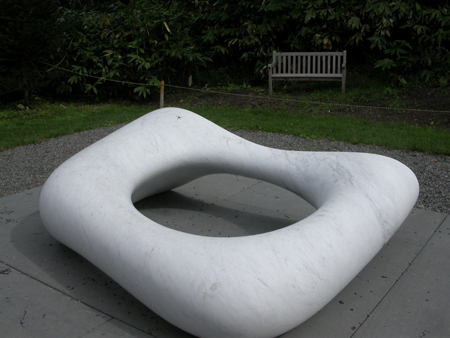 I want to end this article not with my words, but with a quotation of Kan Yasuda: “When people cast their wishes and feelings toward a white stone that simpy exists, then the stone itself becomes a place where past, present and future transcend time are unified, It is my hope that Arte Piazza Bibai will grow into a place that cradles such intangible but invaluable things.”