“Pixelesque”, eBoy‘s first Barcelona exhibition opened at Maxalot Gallery, Barcelona on May 7th. The 3-d world of the Berlin-based pixel-masters is a hubbub of hot chicks, functional robots, spectacular vehicles, weapons of mass destruction and emblazoned with familiar commercial icons. For Pixelesque 23 eBoy images are printed on canvas and framed in classical gilt gold. The results perfectly demonstrate what Maxalot aims for: to cross the boundary between graphic design and modern art. 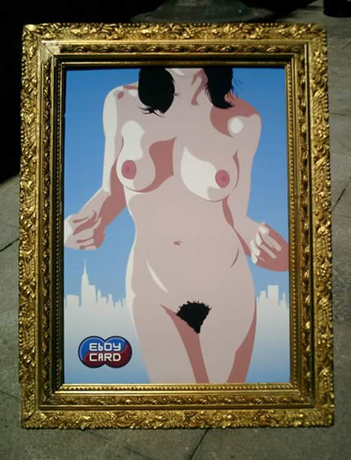 As always, Maxalot threw a kickass launch party, adding an ironic twist to the high culture theme playing music by the classical masters, including Beethoven, Mozart and their wig-wearing contemporaries. Quality champagne was served to add a touch of class to the proceedings and the overall effect was comical and just on the right side of kitsch. 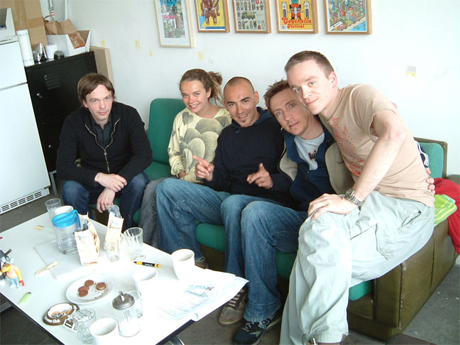 Sadly the eBoys could not be present in person, but Maxalot were lucky enough to catch the German contingent a week later in their Berlin office (see mandatory sofa shot). Steffen Sauerteig, Svend Smital, Kai Vermehr and Peter Stemmler have been working as eBoy since 1998. 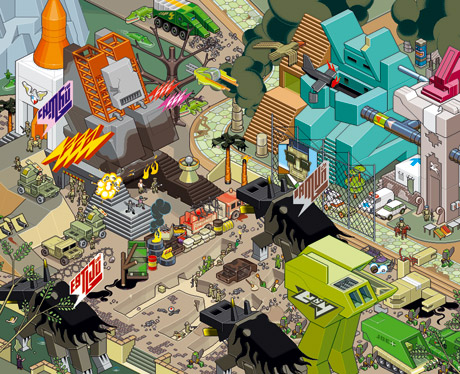 Pixelesque saw the launch of the latest addition to their legendary eCity series, a desert-scape dotted with Inka-inspired buildings and humans warring with giant machines (See above). Alongside this work, Pixelesque shows works from eBoy’s much-loved retrospective including some of their prettiest monsters, the glorious Golden Gals glamorously positioned in lavish gold frames, a selection of entire eCity’s plus eCity segments.