It’s a cold rainy afternoon and I enter the traditional bar “36 Billares” in Buenos Aires downtown. He’s there, sitting at one of the tables, close to the window and just before I come in, he gazes at his watch with a sleepy look. It is colder than usual in BA, and while everyone is returning home, we are about to start our interview. 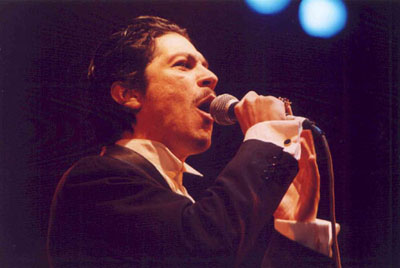 Sergio Pangaro is a “portenio” singer and composer. Although his favorite music style is lounge, and his favorite rhythms are bossa nova, cha cha cha, rumba and swing, he recreates our deepest local roots through his intelligent thoughtful lyrics.
Here, everybody likes to define him, confining him to fit into shallow and light archetypes. He can’t. It is useless. 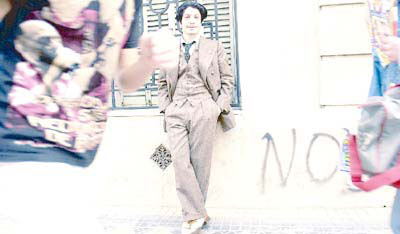 Why do you sing?

I sing because the voice is the vehicle of literature. Books are magical, they are perpetual present. I love music, and you can carry your voice with you everywhere you go. In a reunion, there is music when someone sings.
I started to sing as a child because I was pupil in a religious school. Children happen to be very successful in every familiar event when they practice some form of art. Then I realized that I had to learn a lot to become an artist like those who I admired.

Do you take singing classes?

Yes, of course. My teacher is former opera singer Margarita Kenny. She teaches me her experience in a non-existent world, the world of opera in the fifties in Vienna, Austria. The music that was top at the sales rankings was actually the best music. That used to be normal until the arrival of pop music.

If you could choose an ideal place and time, which one would it be?

Opera world in Europe, from 1920 to 1960. And the fifties in Argentina. I like that time because of the honor codes, and the importance of a man’s word. Everything was more enjoyable and moderate, men didn’t fight against each other and friendship was more important than money. 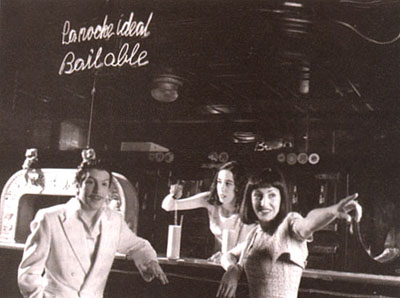 Pangaro and Baccarat perform every Saturday at a local place called “Club del Vino” (Wine Club) and they also introduce their show in parties and corporate presentations. There is a surreal cohabitation between their critical lyrics and their easy-listening music. They seem to be beyond contemporary music and just feel comfortable in a retro style that allows them to act subversive. The best of all is that some people don’t even notice the trick and fall deep into the subliminal scene.

“We have two kinds of audiences: one of them appreciates our art and ideology, and the other sees us as a cocktail party group. These are our two areas of expression. The sound we choose is just a way to express what we want to sing. You have to know what you are singing, that is what transcends time. We can fool a certain audience. They expect to hear a quiet bossa nova but we’re telling them something else.”

Was there an evolution in your lyrics?

There has always been a close up to bolero from our actual reality. It is naif to blame a woman that abandons you for your pain. I then tried to incorporate self help literature, psychoanalysis, and start seeing romance and pain from another point of view, a more subtle one. Last year, with the social crisis in Argentina, our language became more radical. So our lyrics changed and brought back a way of writing, typical of our counterculture of the seventies. We talk about hippies and social protest, and there is also a song about “express kidnapping”, which unfortunately has become very usual in our country these days.

How do you feel when being compared to archetypes?

It’s a shallow thing, but we actually take some social icons and recreate them. For example, a dandy is someone with a fortune to spend. I am not a dandy, I’m more like an anti-hero; but I put on a dandy’s clothes and have fun like he does. I make a B-class movie with fragments of a super production. People do like it!

Do you think that the excessive weight of appearance is the disease of our times?

Well, Oscar Wilde said that looks can’t fool you. If you know how to read them, you get to know the truth. A beggar enters the bar and asks him for money, he makes a little gesture with his head and the man leaves peacefully. A girl who sells flowers follows and offers him a bouquet. He nods and whispers a bare “no, darling” to her. She smiles. I smile. He may be from another time. His manners and personality radiate respect, and everyone senses that. 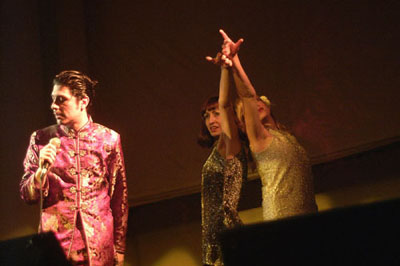 Well, our parents heard it and once we get to be beyond the criticism to our parents, we begin to share some tastes with them. Lounge music is comfortable to talk about certain things. The paranoids can learn to actually hear something that way. My fantasy of a masterpiece is that who has two levels of reading.

How did you meet the girls of Baccarat?

In 1994, I was posing nude for a group of art students. I needed the money and the artist Marcia Schwartz, a very good friend of mine, offered me to pose at one of her classes. Adriana Vazquez was one of the students and I incorporated her to the group. Before her, Baccarat was a solo project: me and a sampler, until I met the girls. The other girl, Vanessa Strauch, is a clothes designer and an actress, she loves the aesthetics of Hollywood in the forties. She came into the group two years ago.

How did you choose the name of the group?

I like it because it sounds elegant and local at the same time. It’s related to glamorous games and crystal.

I like the city itself, the architecture is beautiful, and the bohemian romanticism. A so called culture, coffee houses tradition, people and artists who reunite in coffees. I also like tango and melancholy. A former elegance that used to exist. In BA, people look superior but they are very sad.

Pangaro’s music is a combination of elegance and comic related subtleness. It’s a sound that transports you into a lost belle epoque. From references to technology, lounge music and tango remembrances, Baccarat songs resume one of the visions of our corner of the world.

After leaving the bar, I realize that Buenos Aires looks more melancholic than ever. While I wait for the bus I feel the cold traveling through me in sudden waves. The lights look slightly different tonight, I get to look at them with a poet’s eye, some of the musician’s romantic thoughts keep sounding at the back of my head. I feel I belong to this place, no matter how dark it may seem at night.