“The inspiration for my work comes from anonymous constructions, everyday machinery, landscapes that I meet whilst walking or the poetic vision of a literary text”.

Born in 1933 in Lienz, Austria, Raimund Abraham has been living and working in New York since 1971 where he teaches at the Cooper Union School and the Pratt Insitute. He studied architecture at the Polytechnic in Graz and from 1960 to 1964 he worked in Vienna with Walter Pichler. 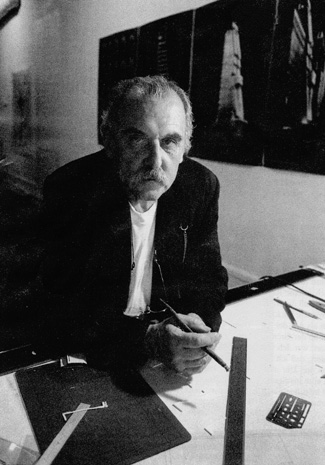 In the sixties and seventies, Abraham was one of the leaders of the Austrian radicals. His “Elementare Architektur” (1963) was one of the movement’s first publications. His departure for the US in 1964 was to provide an important contribution with the meeting of the experimental avant-garde from both Europe and America.

In his professional activity, Abraham has always considered the autonomous value of drawing in architecture to be fundamental. “the drawing is one of the tools we have available for the realisation of an architectural idea”.

The design by Raimund Abraham, chosen from 226 entries as the winner of a competition held by the Austrian Ministry of Foreign Affairs in 1992, saw the building of an 80m high building (in 11 East 52nd Street in Manhattan) on a fairly small piece of land: measuring only 7.60m along the street front with a depth of 28.30m.

The building reflects the design language of Abraham which seems to carve out space to create an architecture characterised by marked graphic and figurative signs. More specifically, Abraham divides the body of the building into three towers which – seen from the street – are lined up one behind the other: the spine holds the stairwell; the robust central nucleus offers itself as a support for the other two towers; the glass mask is raised up along the street front.

In an interview about the contextuality of his work, Abraham answered: “What is context in New York? On one side of the Institute there is a horrible post-war skyscraper. On the other side there is a hotel, no less horrible from before the war. People love to call New York a collage. But a collage would imply some kind of plan. New York instead resembles much more an anarchic imponderability”.