The CodexSeries is an ongoing CD ROM project that consists of projects by different talents in the digital medium. The Series explores narrative, design and interactive work. Somewhere between a compilation CD and a digital fanzine, The CodexSeries is a laboratory, something to share and talk about. 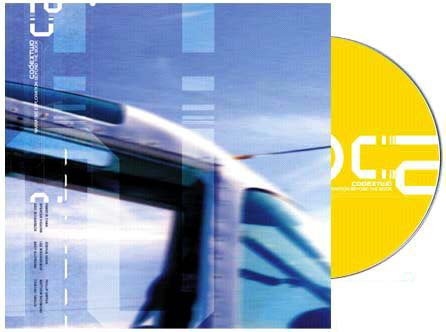 Each project is an expression of an individual or a group that have concepts and ideas they want to express through digital media. The CodexSeries provides a space for these ideas to come to fruition and, as an artifact, the series functions as a reflection of what is going on around us both creatively and technologically.

Francis Chan, developed the project entitled “LITTLE THINGS”. “a personal narrative. recollections. These things fall into my mind, everything is clear. Don’t read between the lines. Don’t take this too deep, they just float to the surface above all else.”

Joshua Davis, developed the project entitled “STARDUST”. With sonic architecture by Shapeshifter, Stardust takes you through differnet interactive and audio experiments where the user is encouraged to drag, click and explore.

Phillip Dwyer, developed the project “EXCERPTS FROM THE HUNTED”. “The sun is coming up and we haven’t been to sleep yet. too much toss and turn. too much talking and touching. it’s just too much. we’re lying when we’re talking…and your “forever” is wearing a little thin. i’m tired and and i’d like to get some rest before we leave.”

Spencer Higgins, created this exploration on multi-dimensional letterforms. Each letter evolves seamlessly into the next as the user types and drags each morphing character.

Matthew Richmond, developed the project “ANALOG”, a template-based typeface founded on an actual metal template that is based on a series of hinged shapes.

Eric Rodenbeck, created the project “2000: INVESTIGATION_04/MACHINE VISION./STAMEN”. “Images and markings that are generated using our bodies as source material bring our bodies into the realm of culture, of commentary; they make our bodies social. more precisely; they give us a choice; we can either turn away from this socialization into nostalgia, and claim that our bodies are inviolate, eternal, natural, or they make us say that the body has always, already been social, that we just haven’t realized it until lately. Both involve a retroactive re-evolution of or operation on what has come before; we reinvent the past while the Body slips from view.”

Andy Slopsema, developed the project “NEVERENDING CYCLES”, a project that is meant to be dragged, explored and played with. 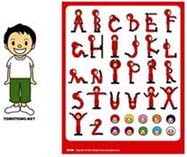 Tomoko Takeue, created the typeface “EXERCISE” using illustrations of a character in different stretching positions. Exercise is a fun way to create words and meanings.