The event that dominates Hong Kong in the month of February is simply Chinese New Year. According to the Chinese zodiac, this is the year of the rabbit. With it brings to anyone born under this sign, wisdon, intelligence, and understanding. Depending on different people, some take it more seriously than others. Anyhow, being in Hong Kong for Chinese New Year is a pretty cool experience. Things happen at a feverish pace but its a good ride if you can catch it all in time. 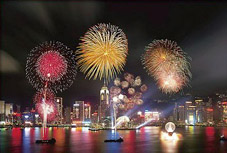 A lot of people like to wander to various waterfront locations to enjoy the nighttime cityscape as many skyscapers and buildings are decked out in glittering lights. Of course for anyone that likes being amongst a massive sea of people, then going to the fireworks display is a good idea. Hong Kong is about being crowded but going to such an event is a choking experience but I guess that’s part of the fun?!?

Anyhow, then there are the parades and flower markets that open a few days before Chinese New Year until the early hours of New Year’s Day. Hoards of people pile into these events as well but the flower market is interesting in that it’s setup and taken down in a matter of a week or so. 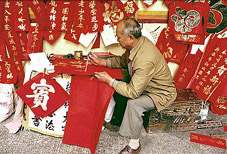 Its purely for Chinese New Year. Among all the festivities and customs happening around Chinese New Year, the one that people seem to enjoy most at one time or another is receiving these little red packets (called ‘lai si’) of money from relatives and friends. Most people travel from house to house for the purpose of visiting friends and relatives but most importantly to get these packets of money!

Of course this only pertains to, relatively speaking, younger people since if you are married, you are the one giving “lai si” to others. But before you get it, you must say “Gong Hei Fat Choi”, which means wishing others a prosperous new year. The great thing is that even if there are unfamiliar people at the home you are visiting, they will still give “lai si” to you!

Another great reason to visit people over Chinese New Year! In any event, no matter what you end up doing, it’s a pretty great time of the year, especially in Hong Kong. People are out and about and are generally in a more festive mood. Seeing Chinese people take this holiday as the biggest of the year, no wonder why it turns out to be the biggest party of them all!