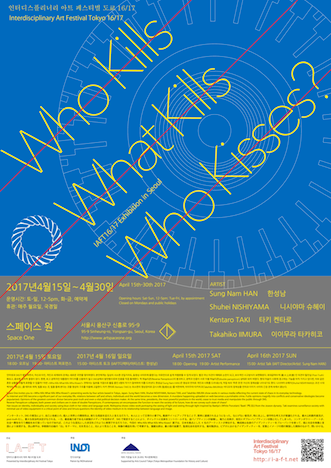 Space One invites you to presenting works by four artists based in Tokyo, Japan. Sung Nam Han, Shuhei Nishiyama, Kentaro Taki, and Takahiko Iimura show works in various media reflecting the current state of chaos in its everyday technology.

As Internet and SNS become a significant part of our everyday life, relations between self and others, individuals and the world becomes a new dimension. A mundane happening uploaded on web becomes a punishable crime. Futile opinions magnify into conflicts and conservative ideologies become popularized. Opinions of the greatest common divisor become post-truth and even a vital political decision maker.

At the same time, presidents, the most powerful positions in the world, cease to trust media and manipulate the public through SNS.  Reverse Panopticon collapses; both power and civilians are in state of double Panopticons. If contemporary art encompasses the function to warn the society of its future, how do we convey such state of chaos?

Han issues on identity, individuality and society using blue cloth in her video and language work. Nishiyama shows video work portraying the seeing of light and seeing through light inspired by Baekja’s (White Porcelain) ‘Baek’ (white) from the Joseon dynasty. Taki examines surveillance society with minimal use of video equipment in a critical point of view and Iimura questions the identity of video medium in its relationship between language and image.