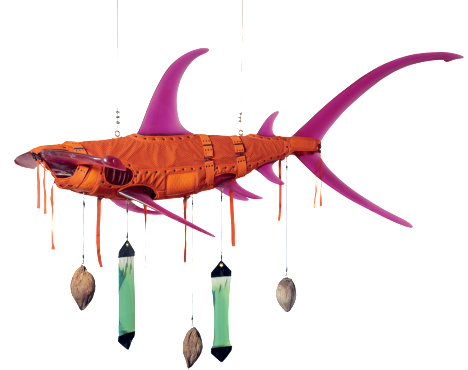 From 21st April an exhibition by Ashley Bickerton “Ornamental Hysteria” will be held at Newport Street Gallery where the culmination of Damien Hirst’s dream to have a permanent space in order to display his collection of art as well as hold exhibitions.

The exhibition will span more than three decades of Bickerton’s career and feature almost 50 works, including both new and previously unexhibited pieces. The show will present examples of Bickerton’s earlier consumerist work as well as his tropically-coloured mixed-media paintings, which explore themes varying from fantastic eroticism and nightmares, to ‘the end of the world’.

This survey – the first of the artist’s work in the UK since 2009 – includes works from his ‘Non-Word Word’ and ‘Wall-Wall’ series, as well as his ‘Travelogues’.