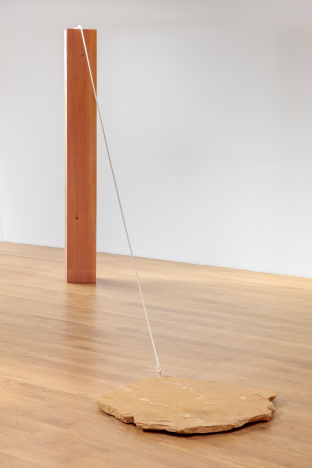 Blum & Poe is pleased to present a solo exhibition of Kishio Suga. One of the most influential artists in Japan, Suga has been central to the history of site-specific installation since the late 1960s. This is his third solo exhibition with the gallery.

Suga gained early recognition for arranging natural and manmade materials in unprecedented installations such as Parallel Strata (1969), a totemic enclosure made of paraffin wax, and Soft Concrete (1970), four vertical steel plates arranged into a square and shored up with a mound of oil-infused concrete. These works situated him as part of a short-lived movement that came to be known as Mono-ha, whose artists took natural and industrial materials and arranged them in mostly unaltered, ephemeral states.

This will be the first exhibition outside of Japan to present an extensive overview of his early works on paper. During the mid-1970s, Suga made several series of minimal geometric collages, alternately creating linear forms with tape while tearing, folding, and marking the paper. As with his installations, in his works on paper he constructs a set of relationships only to deconstruct them. This exhibition will provide a unique opportunity to examine the conceptual connections between these two areas of his practice. On occasion, Suga made paper works on a similar scale to his installations. Layered Dependence (1977), which measures three feet by twenty-six feet, will be on display for the first time in forty years.

Suga has also been selected for the 57th Venice Biennale, Viva Art Viva, opening this May 2017.