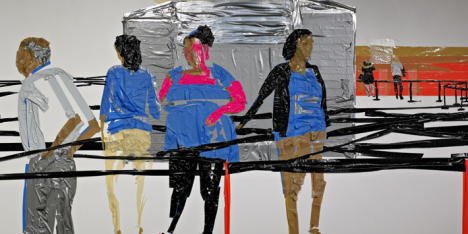 Occupying a suite of former military structures Fort Winfield Scott in the Presidio overlooking the San Francisco Bay, an exhibition “Home Land Security” brings together works by contemporary artists and collectives from around the globe to reflect on the human dimensions and increasing complexity of national security.

The exhibition extends FOR-SITE’s focus on provocative art about place, inviting viewers into decommissioned batteries, an administrative building, and a chapel — some open to the public for the first time — that served for decades as key sites in the US Army’s Coastal Defense System.

The 18 featured artists including Bill Viola, Yin Xiuzhen and Do Ho Suh represent diverse points of origin underscoring the universality of themes of home, safety, and defense in an increasingly pervasive climate of fear and distrust.

The artworks, which encompass media ranging from painting and sculpture to video and performance, respond to both personal and cultural concerns, with the historic sites of Fort Winfield Scott providing a new context for signature pieces and a showcase for site-specific commissions. “Home Land Security” was curated by Cheryl Haines who worked on “@Large: Ai Weiwei on Alcatraz” held from 2014 throughout 2015.