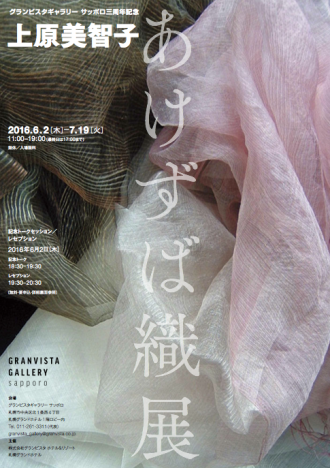 From June 2nd to July 19th, a Dyeing and Weaving artisan, Michio Uehara’s exhibition “Akezuba” will be held at Granvista Gallery Sapporo. She was born in Okinawa in 1949, after learning the textile as a Yoshihiro Yanagi’s pupil in Tokyo, She went back to Okinawa and studied also the technique of Okinawa traditional textile under Shizuko Oshiro.

Uehara is only one Dyeing and Weaving artisan in the world who has a technique to unwind yarn from the living cocoons of the silkworm and to hand-woven in an only single thread as thin as tenth part of the hair. Cloth of 3m made of thin thread as invisible is only about weight 5g, called as a “robe of the angel”, it has received high praise from home and abroad.

“Akezuba” is the meaning of “dragonfly” in Okinawan (Ryukyu) archaic word. Her textile is light but strong as a wing of dragonfly, so it was named as “Akezuba”. For this exhibition, stalls and textiles will be exhibited and sold.