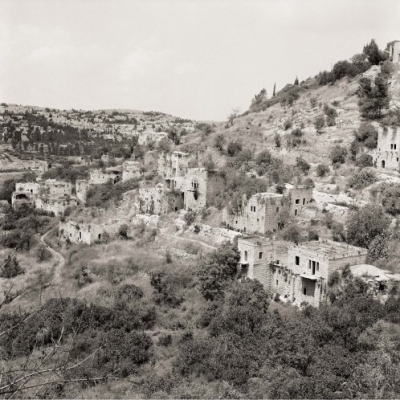 Lifta – Jerusalem District, Fazal Sheikh, The Erasure Trilogy (2015). Presented as part of Memory Trace, 2016, at Storefront for Art and Architecture.

Storefront for Art and Architecture in NY will hold an exhibition “Memory Trace” by Fazal Sheikh, from April 20th. He is a photographer who uses photographs to document people living in displaced and marginalized communities around the world. It brings a site-specific installation of part of the Israeli Separation Wall to the façade of Storefront’s gallery space.

Presented behind the façade are photographs of ruins and landscapes of villages that were evacuated and mostly destroyed during the 1948 and 1967 wars, as well as portraits of Arab-Israelis and Palestinians who were living in these villages and were displaced by war or forced into refugee camps.

The exhibition is presented as part of Erasures, a project by Fazal Sheikh that seeks to explore the legacies of the Arab-Israeli War of 1948, which resulted in the establishment of the State of Israel and in the reconfiguration of territorial borders across the region. The Erasures project is currently presenting a body of photographs at six institutions around the world simultaneously.