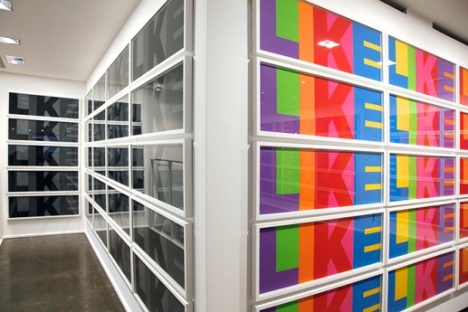 Till February 27th, James Joyce’s exhibition “100 Likes” is holding at colette in Paris. He works in a variety of media including painting, drawing, sculpture and screen-printed editions, with the content often subverting recognisable symbolism. That approach was demonstrated by his recent involvement with Banksy’s contemporary art show Dismaland, where Joyce exhibited a large video installation, and the piece became the signature image for the exhibition.

If the youth of the 1960’s and early 70’s owned “Love” as a word that summed up their generation, then perhaps it could be said that “Like” is the internet generation’s equivalent defining word of their time. “Like” has become ubiquitous in recent years thanks to its use as the currency of popularity within social media platforms. In fact, it has become more than just a word; it has become an action, a reward, and an icon of sorts where status and ego are bolstered by the number of interactions or “likes” earned by social media users.

James Joyce’s “Like” paintings take a neutral and ambiguous position. They can be read as both a reflection of a vacuous culture defined by a word that has lost it’s meaning, endlessly and mechanically repeated, or as a celebration of “Like” as a positive expression, transformed from its former passive status by its modern active context.