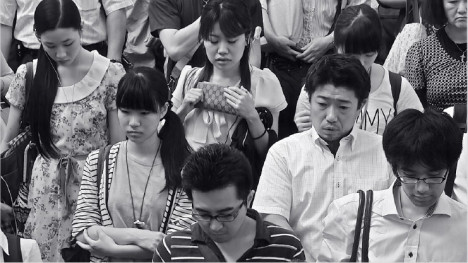 Adam Magyar‘s exhibition “Kontinuum” will start from February 12th, at Julie Saul Gallery in New York. It is hosting the first commercial gallery exhibition outside of Europe and Asia of experimental video and still photography artist, Magyar. The show will combine works from several projects including six videos, images from his Stainless series, and new prints from the Urban Flow series.

Hungarian born and Berlin based, Magyar works internationally to create images of individuals in the urban environment. Commuting on trains and walking in the morning hours, in what he describes as the “in-between times”, he captures the missed moments that we often fail to notice or value.

He began to create the moving images in Berlin and the still images in Shanghai and has now worked in Tokyo, Beijing, Mumbai, New York, Paris, London, Hong Kong and Rome. Magyar states that he is searching for the commonality among people, not their differences. Magyar bends conventional representations of time and space, stretching seconds into minutes and freezing moments impossible to see with the naked eye.